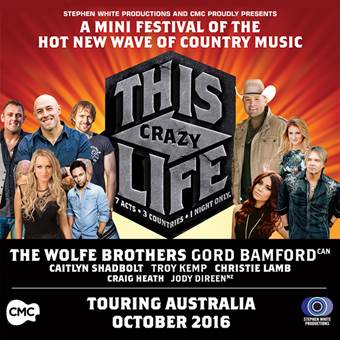 For Canadian country music hit-maker Gord Bamford, joining the highly anticipated This Crazy Life tour is something of a special homecoming. Born in regional Victoria, the recent Canadian Country Music Association (CCMA) Album of the Year award-winner has spent the majority of his life overseas. With 23 CCMA Awards under his belt and numerous #1 smash hits in Canada – the country he has lived in since he was five-years-old – Gord Bamford is a bonafide superstar in his own right. Launching his recent album Tin Roof in Australia, it was the perfect opportunity for him to join forces with some of the hot new wave of country artists from Australia and New Zealand – and hit the road.

The Wolfe Brothers led This Crazy Life mini festival tour kicks off this October and features an enviable line-up that, in addition to being Gord’s baptism to the live Australian scene, also features the likes of 2014 X-Factor star Caitlyn Shadbolt, half of the former award-winning duo McAlister Kemp – Troy Kemp, CMAA Best New Talent Christie Lamb, new-comer Craig Heath and New Zealand’s Jody Direen. Headlining the This Crazy Life tour, named after their recently released album of the same title, The Wolfe Brothers will be returning to Australia after a whirlwind four-month tour of the United States. As the Country Music Channel’s Group of The Year for 2016, the band is well reputed for their high-energy live shows.

Gord Bamford is used to playing to packed houses overseas, and the opportunity to return to his country of birth for this special tour is exciting indeed. Add to that fact that the This Crazy Life event will also play in Traralgon, his former hometown, and the eight-date tour is guaranteed to be part of Australian country music history. Described as a neo-traditionalist artist, Gord has spent the best part of the last two decades honing his craft and is returning to Oz in the best form of his career. His return is also sweet, in that it once again reunites him with his Queensland-based father, Pastor Jock Bamford.

When Gord’s mother – Marilyn – divorced his father and moved them back to her home of Canada, he lost touch with his father. Their rocky relationship, instigated by his father’s alcoholism, meant that for his childhood and most of his youth Gord didn’t know his Dad. In fact, there was an 18-year gap where they didn’t keep in touch. Jock turned his life around, he is now sober and a beloved pastor – highly respected for his work in his Loaves and Fishes Foundation in Brisbane. Four years ago Gord and his dad reached out to each other and since then their relationship has blossomed. In fact, it was only this year during a Canadian tour in February that Jock saw his son perform on stage for the first time. Reestablishing that close relationship has cemented Gord’s connection with Australia and he will be undertaking the tour with his dad by his side.

Don’t miss this unique and explosive night of today’s country music featuring the very best from Australia, Canada and New Zealand. With seven artists, from three countries all on the same bill, this is guaranteed to be something more than a little special.

Tickets are on sale now. The Wolfe Brothers third album This Crazy Life is out now through ABC Music. 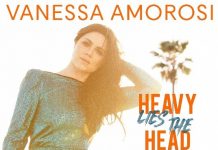