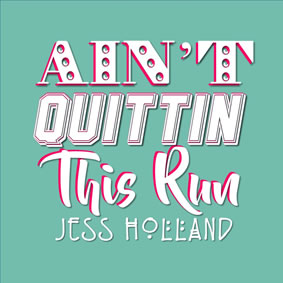 It has been a busy year for powerhouse country singer-songwriter Jess Holland. With 2016 dedicated to writing new material for her forthcoming third album, which she will head into the studio to record after the 2017 Tamworth Country Music Festival, it has been a year of creative growth. With next year flagged as the year for new material, it is prime time for Jess to release one of her favourite tracks from her sophomore album – the last single to be released from that long-player, in time for the sultry summer months. The single, Ain’t Quittin This Run is the perfect wrap-up of her 2014 album Whole Lot To Say. The track is everything that describes Jess Holland’s sound and is the perfect lively soundtrack as we head into Christmas.

“Ain’t Quittin This Run is one of my favourite songs from the album,” says Jess. “It’s bright and bubbly for summer. After a little break for writing, I wanted to show that I haven’t gone anywhere. I have had such a busy year, between writing, performing and festivals, I have been flat out. Much of the year has been dedicated to writing for my new album.”

Jess’ 2014 long-player Whole Lot To Say was the album where she really found her groove. In fact, Ain’t Quittin This Run was one of the first tracks that was written specifically with that album in mind. “My second album really showed my true style – that sassy, country blues and rock,” she says. “I wasn’t so worried about trying to sound like anyone, I just wanted to produce an album I loved.”

Ain’t Quittin This Run embodies that spirit of finding your own path and sticking to it. “I was always told that I should look and sound a certain way,” says Jess. “Instead, I went out on a limb to make the music I wanted to make – and I wasn’t quitting!”

She penned the track during a time of intense introspection. After her debut album Introducing… Jess Holland, Jess found herself trying to determine her musical style and how it could fit within in the country industry. She decided to spend less time worrying about what other people thought and find her own way and just concentrate on the music – the result is Ain’t Quittin This Run.

The track initially started with a main hook, that actually ended up being the chorus once Jess took the track into the studio. She included a mandolin to complement the acoustic guitar and kept the tracking simple so it wasn’t too busy. The track is the epitome of Jess Holland’s sound – blues-influenced with soaring instrumentation. Ain’t Quittin This Run captivates from the first catchy opening bars and is toe-tapping country rock at its best.

With her thoughts now on a new album – her third long-player set for release mid-2017 – Jess is looking forward to what the future holds. She has been writing non-stop and has garnered plenty of fodder for inspiration over the past 12-months. It is an exciting time ahead for this dynamo musician.

“My personal life has changed a fair bit in the last couple of years,” she says. “Relationships, moving towns, moving house… I’ve really steered towards getting back to my roots and as a result, it has influenced my writing. After Tamworth Country Music Festival, I will be heading into the studio to start recording the new material, which I am so excited about. Following the final product, it will be non-stop promo and touring!”

The Reef Stampede returns in 2017 with two jam-packed nights of country fun Headlined by Hurricane Fall supported by a toe-tapping music line-up featuring...