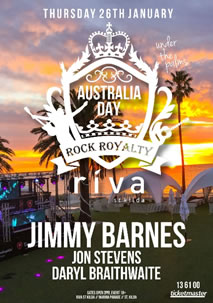 Australia Day on St Kilda Marina is going to be all about Aussie rock royalty. With an enviable line-up featuring Jimmy Barnes, Jon Stevens and Daryl Braithwaite, music lovers are in for a treat on January 26. The bill will see Aussie rock legends putting on their Australia Day best under the palms by the sea at the iconic Riva St Kilda. This is a rare chance to catch three of Australia’s most impressive performers share the same stage and celebrate our national day of pride with some incredible live music.

When it comes to describing Australia – and great Australia Day celebrations – the sun, surf and of course, good music. Riva St Kilda is the epitome of all those things. With its prestigious bayside location, Riva features uninterrupted views to the city and Portarlington. Its live events are set-up on its expansive grass area right next to the water, overlooked by the Riva deck. It is no surprise that Riva St Kilda is considered a world-class destination, the venue is easily one of the most unique in the country, nestled right on the foreshore with a breathtaking backdrop of the St Kilda Marina. The outdoor festival vibe is the perfect location for an afternoon of great Aussie fun with some Oz rock icons.

Jimmy Barnes needs no introduction to Australian audiences. Revered from both from his time fronting Cold Chisel and his top charting solo career, Barnes has toured the breadth of Australia. He has an enviable back catalogue that makes for incredible live performances with songs like Working Class Man, When Your Love Is Gone and No Second Prize to name a few. From rock to soul, Jimmy embodies the spirit of the Australian working class man. Many of his songs have become anthems and are the perfect representation of what is means to be an Aussie. With the recent release of his memoirs Working Class Boy Jimmy Barnes’ is as well reputed for his live performances today as when he first smashed onto the scene fronting Cold Chisel.

Jon Stevens is another rock legend, adored for his time fronting Noiseworks, as well as for his own chart-topping solo material. He has fronted bands such as the Dead Daisies and INXS, but it was with Noiseworks that he first rose to fame in Australia in 1986 with the band’s debut single No Lies. What followed was a swag of incredible songs, such as Take Me Back, Love Somebody, Touch, Freedom, Miles and Miles and In My Youth to name a few. The band sold in excess of 1.2 million albums with 15 hit singles before calling a break in the early 1990s. On the solo front, Jon was a superstar within his own right in New Zealand before the age of 16. He had two consecutive number one singles before moving to Australia. Recently, Jon joined forces with Dave Stewart (Eurythmics) to record a new long-player Starlight, slated for release in 2017.

When it comes to recognisable voices in the Australian music scene, there are few as impressive as that of Daryl Braithwaite. In a diverse career that has spanned decades, Daryl’s consistency as a performer has never wavered, something that sees him performing regularly to packed crowds around the country. Starting his career in the 1970s as the frontman for Sherbet, Daryl was crowned King of Pop and the band produced 20 national Top 40 singles. In the 1980’s Daryl set out on his own solo career, releasing smash hit singles such as One Summer, As The Days Go By and The Horses to name a few. There is no doubt that an Australia Day chorus of The Horses will get any audience in the mood for a great party!

Tickets for the Australia Day celebration at Riva St Kilda go on sale on Tuesday 20th December 2017 through Ticketmaster. Enjoy an unforgettable day of great Aussie music and classic BBQ on site this Australia Day.