Keeping true to their reputation as one of the hardest working rock bands on the Australian touring circuit today, The Screaming Jets are getting back on the road in 2017 for a whirlwind tour in February and March supporting their recent release Chrome. The tour – Chromozone – is actually their third run in as many months, buoyed off of the success of their May 2016 long-player. The 2017 run of dates will see the band visit – and revisit – places by popular demand.

For lead singer Dave Gleeson, announcing another tour is a reflection of the support The Screaming Jets have received from Aussie music fans. “The thing with touring is, if you are not doing very well, people don’t want to book you,” he says. “To be able to do three tours on the Chrome album is fantastic. It shows that people are into the band and into new music. To be out again in February is really exciting.”

Chrome was the band’s first studio album in eight years. It saw them land in the ARIA Top 30 and celebrate with a special Music Max Live album launch. Reaching #2 on the Independent Music Charts, #10 on the ARIA Australian Artist Chart and #30 on the ARIA Mainstream Charts, they showed that the band only gets better with age. The long-player is kick-ass, heavy laden with riffs and gritty guitar solos, encompassing strong basslines and a tightness that can only come from years on the road. Above all else, it is true Aussie rock.

Dave says the opportunity to keep touring comes down to fans just loving Aussie rock. “It is totally to do with the fans,” he says. “There are so many competing genres out there, and our fans are loyal enough to keep coming and supporting the band. It is a great thing, that loyalty. There is never a dull moment with The Jets, the band never lets fans down.”

The short, but high voltage run of shows in February and March 2017 will give audiences not only an opportunity to experience songs from the new album, but also hit tracks from their previous seven albums. After 27 years of touring and making records, The Jets know how to rock Aussie audiences and with tracks such as Better, Helping Hand, Needle and Come On, mixing with new tracks such as Automatic Cowboy and Cash In Your Ticket, their live shows never disappoint.

It is a ‘live’ thing, according to Dave – the full band experience, not just a “bloke on stage with a laptop”. “As far as hard rock n roll fans go, they want to see people on stage playing their instruments,” he says. “They want to see Jimi and Scott ripping out, and they want to see Paul stomping around the stage owning it, and Mickl banging away… and me throwing myself to the floor. The fact that people want to see an energetic live performance and passionate show – all those things are never going to go away.”

Tickets for The Screaming Jets Chromozone tour are on sale now. Chrome is out now through independent label Dinner For Wolves (Rocket Distribution / InGrooves). 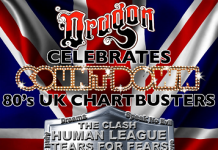