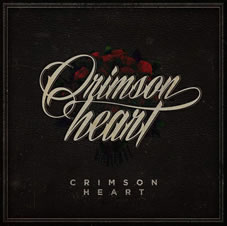 Melbourne indie duo Crimson Heart are creating a new sound in the local scene, successfully fusing rap and soul with pop and indie rock, genres that aren’t predictably compatible. A collaboration between established musicians Big Dip and Kaye, Crimson Heart are rapidly earning a reputation for pushing the envelope and have been garnering themselves a solid fan base in the process. With the release of their second single, the self-titled Crimson Heart, on January 23, the year ahead is certainly looking bright for the creative pair.

The self-titled single is an apt demonstration of the duo’s musical chemistry. Kaye’s pop-infused vocals and aesthetic fit seamlessly with Dip’s raw wordplay. The single solidifies Crimson Heart’s unique blend of vintage and contemporary sensibilities — a new twist on pop and urban music. It is an impressive follow-up to their debut single Cave, which was released late 2016.

With equally impressive solo careers underneath their belts, Big Dip and Kaye met at a gig at The Workers Club in 2015, instantly connecting over music. Their first official collaboration not only resulted in Crimson Heart’s debut single, but has already provided fodder for inspiration for an album worth of original material.

“We realised there weren’t many singers from a soul and rock background working with hip-hop artists in Australia, so we wanted try a new project together and appeal to a niche market,” says Kaye. “The reward is that I get to share my passion with my favourite person and we are both complementing each other’s style to create a unique sound.”

Despite forging ahead in a new genre, both Kaye and Big Dip have found their feet musically. Surprisingly, there haven’t been as many challenges as they first expected. In fact, it has almost been something of an organic process fusing their styles together. The fact they share an almost tenacious work ethic has helped too.

“We are both very open minded to different sounds and we seem to really gel well together,” says Big Dip. “I think perhaps Kaye was a little less into the hip hop sound as I was into the pop/soul sound, so initially that was a bit of a challenge, but she really embraced it and has taken it upon herself to learn the nuances of it. The best thing about the project is that we share everything. We go through certain beats that we like, see if it suits us, discuss where we want the track to go and it really just flows from there. When it comes to song writing, we generally write our own verses and share responsibilities for hooks and choruses.”

This 50/50 approach was true in the way they approached the single as well. They shared the same room, writing their parts as they listened to the instrumental on separate headphones. They used the basis of their own relationship as the inspiration – delving into the nuances of the chemistry they found with each other to pen a song that symbolised their unity.

“We wanted to do a track that was a bit more back and forth than our other ones,” says Dip. “Rather than having a verse each we wanted to intertwine them a bit more…Kaye wrote the hook and I just fell in love with it straight away. The single has everything that represents us: passion, fire, softness and love for each other and our music.”
An established hip-hop artist in his own right, Big Dip has supported the local urban community for several years, performing and writing his own music – six EPs and a forthcoming LP. Kaye has a performing arts degree and has performed in numerous bands, as well as fostering a successful solo career. Her original song Drowning in your Arms received a bronze medal at the 2014 World Championship of Performing Arts in Los Angeles.

In their infancy, Crimson Heart have already received incredibly positive feedback in the Melbourne music community, appealing to both hip-hop and non-hip-hop listeners. Now the duo are spreading their wings further afield and taking their original material to music-lovers outside of their home-state. There are definitely big things on the horizon for Crimson Heart in 2017!