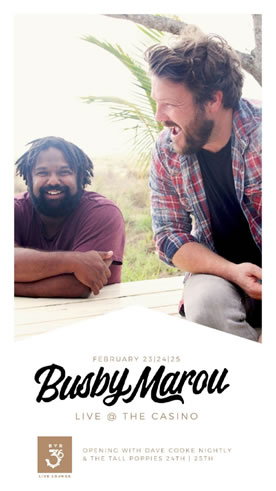 Continuing its dedication to supporting the local live music scene, the Live at the Casino program presents three massive nights at BAR36 in February with Queensland duo, ARIA award winners Busby Marou. Supporting their forthcoming third long-player – Postcards From the Shell House – Tom Busby and Jeremy Marou will be turning the heat up on the central Casino stage.

Launching the Live at the Casino touring artist series in January 2017, The Reef Hotel Casino is quickly demonstrating the eclectic range of music locals can expect to see. With an ethos of showcasing music that appeals to a wide range of ages and demographics, the Live at the Casino program will present some of the best artists on the scene today, both locally and internationally. From chilled affairs, to vibrant pop parties and rockin’ shows, the forthcoming events throughout 2017 are guaranteed to delight. Audiences can expect to see some Casino favourites, as well as artists who haven’t previously toured to the Far North. In additional, there will always be a jam-packed schedule of great live local music throughout the week.

Joined by local bass maestro Enzo Russo and supported by Dave Cooke and The Reef Hotel Casino regulars Tall Poppies, these three nights in February are guaranteed to delight all music fans. The Rockhampton duo are known for their melodic guitar riffs, sincere lyricism and folk-infused compositions. Postcards From the Shell House is a collaborative effort with producer Jon Hume (The Stables Studios), featuring a selection of stripped-back indie folk and the first single Getaway Car.

Postcards From The Shell House was recorded over the last 18 months at Stables Studios in Victoria, as well as during sessions on Great Keppel Island. The mysterious shell house is an old heritage-listed building on Great Keppel Island, a landmark that has particular significance for both Tom and Jeremy – they used to sit around the campfire there and sing songs.

Influenced by artists such as Crowded House, Elvis, Pearl Jam, Willie Nelson and Paul Kelly, Busby Marou have earned a stellar reputation on Australian shores. In 2010 they won the Indigenous Award at Brisbane’s QSong Awards, and a year later they released their debut self-titled album. The album – The Blue Road – was produced by the legendary Anthony Lycenko (Pete Murray; David Bowie; Shifter) and earned them critical acclaim. The album was certified ARIA Gold in Australia in July 2014 and their follow-up, Farewell Fitzroy, debuted at #5 on the album chart.

They have also been fortunate enough to tour with some incredible national and international music icons, such as Pete Murray, Dolly Parton and James Blunt. In 2012 they took home the APRA Music Award for Blues & Roots Work of the Year. Busby Marou’s album Postcards From the Shell House is slated for release on 17 February 2017.

Busby Marou perform in BAR36 at The Reef Hotel Casino as part of the Live at the Casino series from 23-25 February 2017. Entertainment kicks off with support by Dave Cook from 6pm nightly. The party continues with live music til late with The Tall Poppies.

*** Live at the Casino shows in BAR36 are non-ticketed shows.
For more information, please visit www.reefcasino.com.au