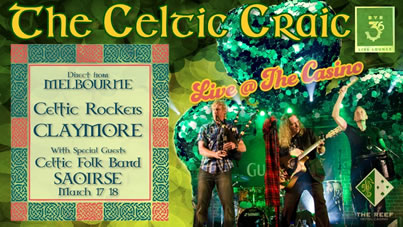 The Reef Hotel Casino are getting their craic on for a massive two nights celebrating St Patrick’s Day. Returning by popular demand, Melbourne Celtic rockers Claymore will take to the stage on St Paddy’s Day and the following evening for a rockin’ loud evening of entertainment. Internationally considered one of the world’s premier Celtic rock bands, an evening in the company of Claymore always demands audiences to be on their feet from the onset.

Forget everything you’ve ever thought you knew about Celtic rock bands, because Claymore, defies all expectations. This enigmatic band of multi-instrumentalists not only manages to combine traditional elements of Celtic music, but they take that passion and soul and rock it right into the 21st century. Few bands can pull off the sensitive task of re-educating the traditional realm into the modern day, but that’s something of a specialty for Claymore. Not only that, but they manage to write beautiful original Celtic compositions, and even lend their style to some power rock classics, all with an Irish and Scottish twist.

Although many Celtic bands may come and go, each sounding remarkably like the other, the point of difference with Claymore is within the term ‘rock’. They add a current flavour, and interestingly, an inherent Australian-sound, to their music, bringing ole time traditional themes into the future, and appealing to audiences young and old. From the penetrating beats of the bohdrahn in the battle songs of the Jacobite rebellion to the hypnotising drone of the pipes in the evocative love ballads of Scotland and Ireland, fans of the band find themselves conquered by the most fiery and delicate textures of Celtic music.

Joining Claymore for their sojourn to the Far North are revered Melbourne Celtic folk band Saoirse. Saoirse, the Gaelic word for freedom, are known for their vibrant Irish vocals and dance. They delight their audience with beautiful renditions of Irish ballads and original works and their spirited jigs and reels are guaranteed to get the feet tapping. They’ve performed at a swag of the country’s premier festivals including Port Fairy Folk Festival, Brunswick Music Festival and the National Folk Festival to name a few. They’ve got three acclaimed albums under their belt, including their multi-award winning 2013 release Music Evermore. 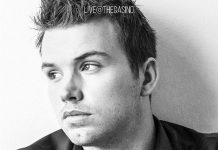