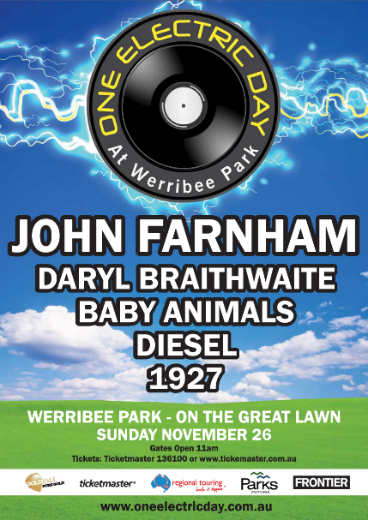 Every year the highly anticipated ONE ELECTRIC DAY concert sells out well in advance, and with a coveted line-up of Australian music royalty on the line-up for the fifth year, the 2017 event will be no different. This November, the Australian-centric music festival celebrates the best of the best with a line-up headlined by Aussie icon John Farnham, with very special guests Daryl Braithwaite, Baby Animals, Diesel and 1927. That’s eight hours of jam-packed live entertainment on the Great Lawn at Werribee Park.

Promoter Duane McDonald says he is excited to continue to bring the ONE ELECTRIC DAY concert to its home in Werribee each year. “ONE ELECTRIC DAY has become an important part of Melbourne music lovers annual calendars,” he says. “We are excited to bring John Farnham back in 2017 to headline. When he last headlined ONE ELECTRIC DAY in 2015, the festival sold-out in record time. After a sold-out season on the Red Hot Summer Tour he returns to Werribee for this special show alongside some incredible rock royalty. The 2017 ONE ELECTRIC DAY is going to be an incredible day and tickets will sell-out.”

There is no doubt about it, John Farnham is the voice of the Australian music industry. Revered as one of the best male vocalists – by both fans and fellow musicians – he has had an incredibly versatile career. He took the hearts of the nation with his debut release as Johnny Farnham in 1967. Fast forward to the 1980s and John Farnham become one of Australia’s favourite sons with an incredible string of smash hit albums. His return to the industry – the 1986 album Whispering Jack – was the first record to sell over a million copies in Australia and its chart topping single You’re The Voice cemented the honey toned solo artist as the ‘voice’ of the country. Over the next several years he released hit after hit, including Pressure Down, Reasons, A Touch of Paradise, Age of Reason, Two Strong Hearts, Angels, Talk of The Town, Chain Reaction, Burn For You, Have A Little Faith (In Us) and That’s Freedom to name a few. He has been selling out stadiums, always incredibly in demand for his live shows – his ONE ELECTRIC DAY show promises to be an unforgettable experience.

When it comes to recognisable voices in the Australian music scene, there are few as impressive as that of Daryl Braithwaite. In a diverse career that has spanned decades, Daryl’s consistency as a performer has never wavered, something that sees him performing regularly to packed crowds around the country. Starting his career in the 1970s as the frontman for Sherbet, Daryl was crowned King of Pop and the band produced 20 national Top 40 singles. In the 1980’s Daryl set out on his own solo career, releasing smash hit singles such as One Summer, As The Days Go By and The Horses to name a few. Baby Animals burst onto the Australian scene in the 1990s with a solid rock force and a sassy lead singer. Suze Demarchi proved that girls could rock just as hard as guys and the Baby Animals soon kicked some impressive rock butt with hits such as Rush You, Early Warning and One Word. The band scored themselves ARIA awards for best album and toured the globe. When they split in the mid-1990s they ended a special era of Australian music. The band recently reformed and their inclusion on the ONE ELECTRIC DAY line-up is a rare chance for music fans to see an original rock at its best.

Diesel first burst on the music scene some 25 years ago.  With blues music in his DNA, an influence largely from his Father’s record collection, he has blended styles to come up with a truly unique sound, punctuated with his distinct guitar playing and vocals.  More than 35 singles, 13 albums and 6 ARIA awards later, Diesel always puts on an incredible show. As a band, 1927 are known for their enduring hits – with a swag of classics such as That’s When I Think Of You, Compulsory Hero, To Love Me, Don’t Forget Me and If I Could, to name a few. They smashed onto the music scene with their quintuple platinum debut Ish in 1988, garnering themselves multiple ARIA awards. With countless live performances, 1927 have reached legendary status and their most recent release – Generation i – has garnered them a whole new legion of fans.

General public tickets go on sale 9am on Monday 1st May through Ticketmaster.