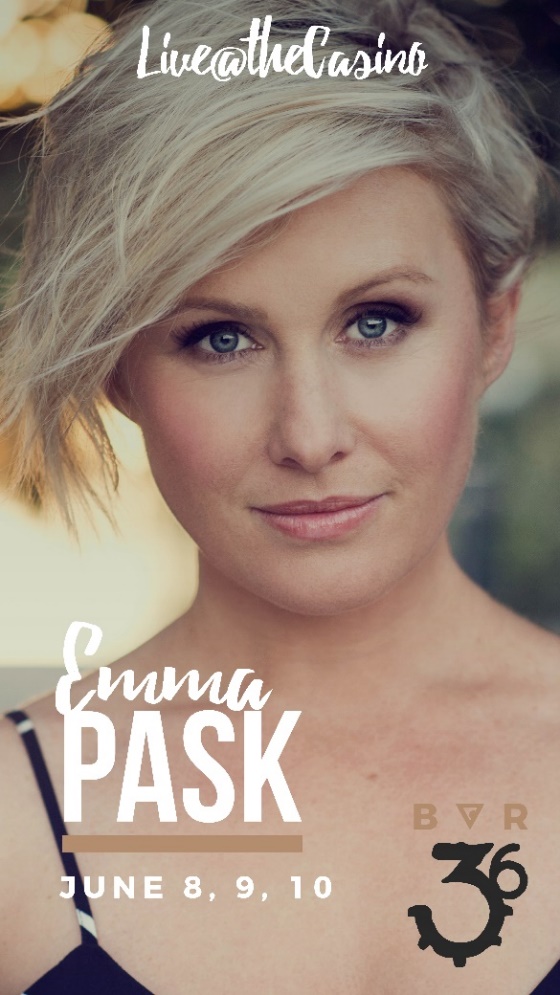 It might be the start of winter and the middle of the year, but June is a month of incredible music at The Reef Hotel Casino. Kicking off the month in gorgeous style, BAR36 welcomes a true talent with beautiful songstress Emma Pask taking to the stage for three special nights.

Australian jazz sensation Emma Pask has had quite the career. Discovered in high school at the age of 16 by celebrated jazz musician James Morrison, Emma quickly became a rising talent. Since then she has released several critically acclaimed jazz albums, performed internationally and appeared on one of Australia’s favourite talent shows — The Voice. Her upcoming performances at The Reef Hotel Casino in June will see Emma and her band perform music from her 2016 studio album Cosita Divina. The self-funded and self-produced album is a Latin-jazz fusion record that showcases Emma’s love for Latin American music and storytelling.

An award-winning musician, Emma’s effortless and honest stage presence combined with her powerful vocals and range leaves audiences spellbound and inspired. Her performances interweave storytelling and Latin rhythms that transport listeners to the sounds and stories of Latin America. Bar36 is a sophisticated live cocktail lounge with high end sound design, making it the perfect venue for Emma’s charming presence.

Emma is no stranger to performing in front of formidable audiences. By request, she has sung in London at The Queen Elizabeth Hall with the BBC Concert Orchestra, performed in China with The Shanghai Symphony Orchestra, Auckland with the NZ Philharmonic and Perth with the WA Symphony Orchestra. She also performed the Bridal Waltz at Nicole Kidman and Keith Urban’s wedding and toured Australia with the incomparable George Benson. She also happens to be a favourite of Latin-American superstar Ricky Martin and has performed in front of the late Princess Diana of Wales and Princess Mary of Denmark. She has also co-hosted Channel 10’s Studio 10, featured on Channel 9’s Carols by Candlelight and is a regular name on the prestigious Ascona Jazz Festival bill in Switzerland.

In 2013 Emma auditioned for the second season of The Voice, quickly becoming one of Ricky Martin’s favourite contestants. After she performed the iconic number Mas Que Nada in both English and Portuguese, Ricky stood up proudly and announced to the world that he would like to invite Emma to record with him on his upcoming album. In fact, it was his influence that inspired her to create her own Latin-infused album Cosita Divina.

Emma has quite a few accolades under her belt as well. She has been awarded a ‘Mo’ for Jazz Vocalist of the Year, been nominated for ARIA awards and her independent self-funded Jazz album Some other Spring held the #1 spot on the Jazz charts for several weeks. In 2013 Emma was signed to Universal Music and released her Christmas album Season of My Heart, a huge success that maintained the #1 position on the Jazz Charts for many weeks and led to an ARIA award nomination for Jazz Album of the year.

Emma Pask performs at BAR36 at The Reef Hotel Casino from Thursday 8th – Saturday 10th June 2017 from 7.30pm nightly. Entertainment stars with Chris Lloyds nightly; Friday evening the fun continues late with THE CODE and the party heats up Saturday night with THE TALL POPPIES. *** Live at the Casino shows in BAR36 are non-ticketed shows. For more information, please visit www.reefcasino.com.au