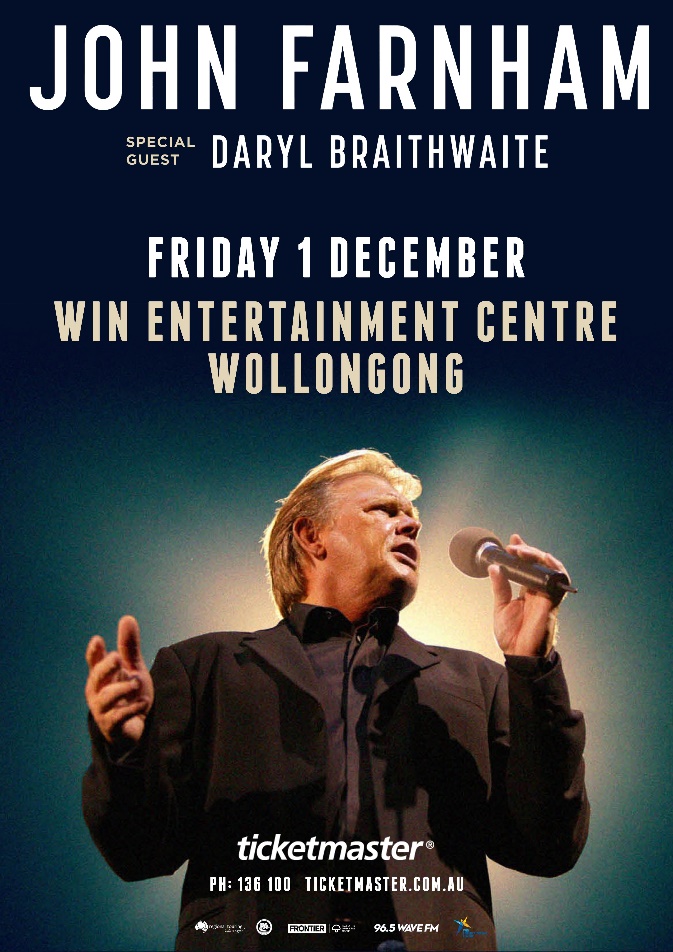 In a very special event, The Voice of Australian music, John Farnham, has announced an exciting show at WIN Entertainment Centre in Wollongong this December, with special guest Daryl Braithwaite. In a rare event, this solo headlined show will see John and his band traverse his greatest hits from the iconic Whispering Jack through his extensive back catalogue.

“I’m thrilled to be returning to Wollongong this December with my good mate Daryl Braithwaite,” says John. “The crowds have always been fantastic in the Illawarra and this will sure be a night to remember!”

John Farnham certainly needs no introduction to fans. His music is part of the Australian psyche. Revered as one of the best male vocalists – both by fans and fellow musicians – he has had an incredibly versatile career spanning from his debut in 1967 through to today. He won the hearts of Australia and became one of the country’s favourite sons with an incredible string of smash hit albums. His return to the industry in 1986 – the legendary Whispering Jack – was the first album to sell over one million copies in Australia and its chart topping You’re The Voice cemented the honey-toned solo artist as the ‘voice’.

Over the next several years, John Farnham released hit after hit, including the likes of Pressure Down, Reasons, Touch of Paradise, Age of Reason, Two Strong Hearts, Burn For You, Chain Reaction, Talk of the Town, Angels, Have A Little Faith (In Us) and That’s Freedom to name a few. He also released some incredible renditions of songs he made his own, such as When The War Is Over and One. Since the 1980s, he has been selling out stadiums, always incredibly in demand for his live shows.

John Farnham will be joined by another icon of the Australian music scene, Daryl Braithwaite. In a diverse career that has spanned decades, Daryl’s consistency as a performer has never wavered, something that sees him performing regularly to packed crowds around the country. Starting his career in the 1970s as the frontman for Sherbet, Daryl was crowned King of Pop and the band produced 20 national Top 40 singles. In the 1980’s Daryl set out on his own solo career, releasing smash hit singles such as One Summer, As The Days Go By and The Horses to name a few.

Tickets for John Farnham’s show go on sale at 10am on Friday 26th May 2017 through Ticketmaster. Frontier Touring Members pre-sale is from 12pm Wednesday 24th May to 12pm Thursday 25th May 2017.