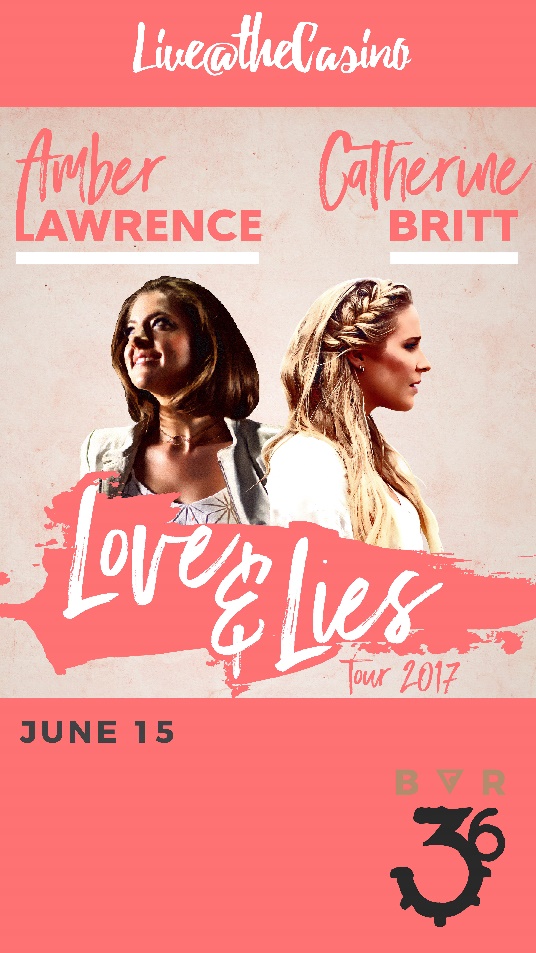 In a special music event, two of Australia’s leading female country singer-songwriters – Amber Lawrence and Catherine Britt – will be bringing their Love & Lies tour to BAR36 at The Reef Hotel Casino for one night only this June. Both women will perform a solo set of their biggest hits before coming together to perform a series of duets. The show promises to take audiences on a beautiful two-hour journey into the craft of these two women; two storytellers sharing their tales through the medium of performance. Amber and Catherine will be supported by special guest and 2016 ARIA-award nominee Fanny Lumsden.

Fresh off the back of her 2016 album Happily Ever After Amber Lawrence is an award-winning artist and acclaimed singer-songwriter. Her accolades include a Golden Guitar win in 2015 and CMC’s Female Artist of the Year in 2015/2016. She is often referred to as one of the most hardworking artists in the industry today and her album Happily Ever After has been commonly referred to as her most mature album to date. The 12-track LP is an ironic play on the traditional understanding of ‘happily ever after’, a concept that Amber fiercely deconstructs and flips inside out — she is determined to expose and explore the happiness found in imperfections. Happily Ever After was produced by ARIA and Golden Guitar winner Shane Nicholson (Allison Forbes, Catherine Britt). Written between Nashville and Australia, the fifth studio album from Amber is a modest and sincere record filled with an equal amount of intimacy and universality.

Catherine Britt is a multi-ARIA award nominee and CMAA Golden Guitar Female Artist of the Year (2009, 2013 & 2016). She has a voice that instantly grabs your attention and her craftsmanship as a singer, songwriter and storyteller is inspiring. She has spent many years in Nashville touring and recording relentlessly and at the age of 17 she was the youngest artist to perform at the famous Grand Ole Opry in Tennessee. All of Catherine’s album releases have been nominated for an ARIA Award for Best Country Album, a prestige that sets her apart from most country acts. She has also performed and recorded with a number of notable national and international country artists, including Keith Urban, Chris Isaak, Kasey Chambers, Paul Kelly and Sir Elton John. She has also worked tirelessly in publishing, editing and radio – she is a multi-talented artist who is passionate about promoting the local Australian country scene.

Opening the night at BAR36 will be country sweetheart Fanny Lumsden, a ‘breath of fresh country air’, according to Rolling Stone Magazine. Her debut album Small Town Big Shot came in at #6 on the Country ARIA Chart, #15 on the AIR chart and #1 on the CMC chart. She sold out a Country Halls Tour and received an ARIA nomination in 2016 for Small Town Big Shot.

In late 2016, Amber released a boppy single featuring guest vocals from Catherine and Fanny titled Cheers to the Girls, an apt ephenisum for what audiences can expect from this special evening at BAR36 in June. Don’t miss out on hearing solo performances, duets and collaborations when Amber, Catherine and Fanny hit the stage at BAR36 for one night only on Thursday 15th June.

Amber Lawrence and Catherine Britt, with special guest Fanny Lumsden perform in BAR36 at The Reef Hotel Casino on Thursday 15th June 2017 from 8pm. *** Live at the Casino shows in BAR36 are non-ticketed shows.