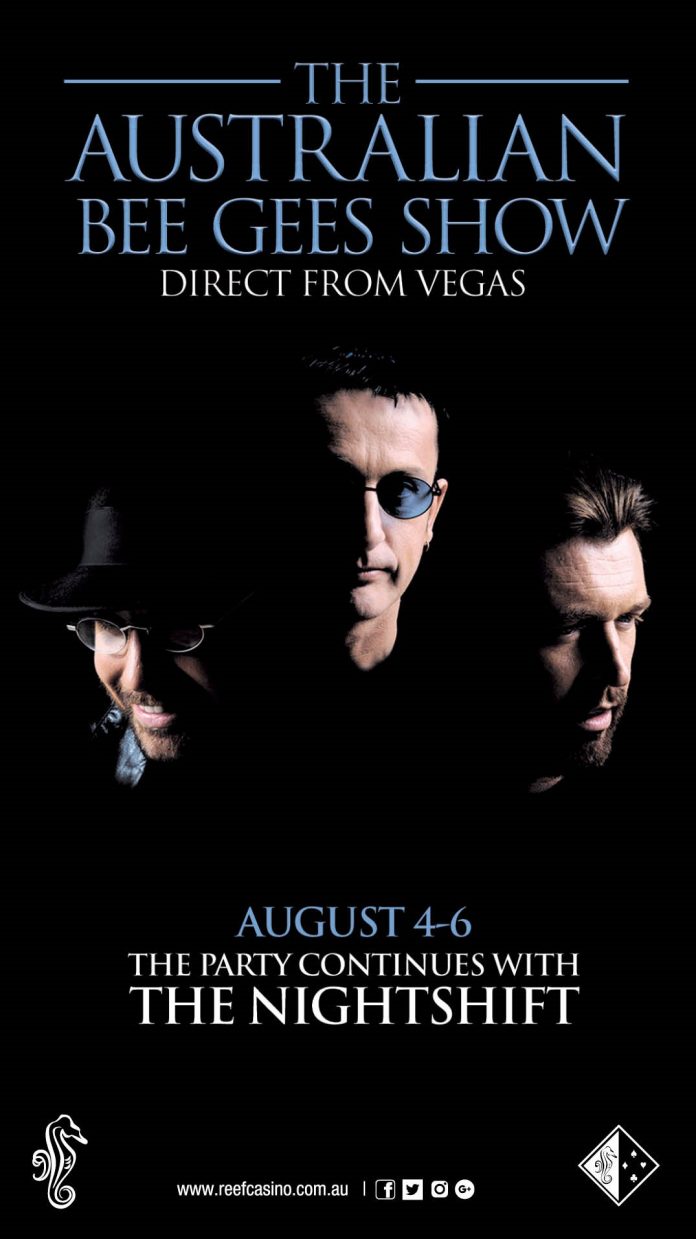 The acclaimed The Australian Bee Gees Show returns, direct from Vegas, to The Reef Hotel Casino this August for lighting and visuals concert extravaganza over three massive nights. It’s been more than 20 years since the revered tribute band have been touring, paying homage to the legendary Brothers Gibb. Described by the president of the Bee Gees Fan Club USA as the best Bee Gees tribute in the world, an evening in the presence of The Australian Bee Gees Show is akin to being back in the stadiums of old watching the Bee Gees traverse their greatest hits.

The Australian Bee Gees Show embodies the spirit the Gibb brothers took out on stage and traverses the high of their international and far reaching careers. The band touch on all eras of the Bee Gees music, while still keeping as traditionally close to the original performances and vocals as possible. It is these ideals that have seen the show earn such acclaim and respect from hard-core fans, who would normally shun a tribute band, but instead have helped rank the show as one of the best in the world.

A testament to the success of the group is that they have been consistently on the road since their first shows in 1996. Add to this that the band do not strictly impersonate the Bee Gees, but instead, while keeping closer to the traditional style of the original group inject their own personalities into the performances, it is no surprise to find that they play to stadium packed audiences internationally. They have made their home on the stages in Vegas, being named as the Best Tribute Show for 2015 by the Las Vegas Review Journal and still continue to pack houses.

Bringing their show down to an intimate stadium experience at BAR36, The Australian Bee Gees Show will be highlighting the best Bee Gees songs such as I Started A Joke, To Love Somebody, Stayin’ Alive and Jive Talkin to name a few. The concert is a retrospective look as the amazing careers of the Brothers Gibb, it is presented in two parts, complete with costume changes defining the era. The show will feature all of the greatest hits throughout the decades, but also tell the Bee Gees story in a multi-media show that captures the mood and memories of the time.

No matter what your musical preference, you simply can’t miss this show. This isn’t about being a tribute band, it is much more, and the musicianship and skill of the performers on stage make for a truly entertaining evening. It is Vegas entertainment in Far North Queensland – the ultimate Bee Gees experience, and the absolute next best thing to jumping in a time machine and heading back to the 1970s for the real deal.

The Australian Bee Gees Show performs at BAR36 at The Reef Hotel Casino from Friday 4th to Sunday 6th August 2017. Join the party from 9pm on Friday & Saturday nights. The Australian Bee Gees Show kick off with a Sunday Night Fever Session early in BAR36 from 7pm on the 6th. The party continues nightly until late with The Nightshift. *** Live at the Casino shows in BAR36 are non-ticketed shows. For more information, please visit www.reefcasino.com.au