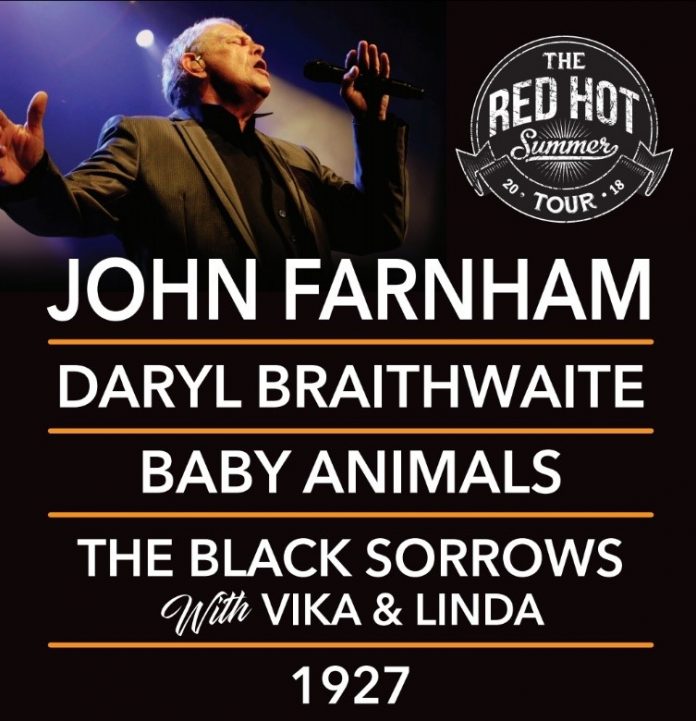 The Red Hot Summer Tour is one of the biggest touring festivals on the circuit today, a reputation it will further cement with the announcement of the 2018 second leg featuring a massive all-Aussie line-up. Headlined by the ‘voice’ of Australian music, John Farnham, with special guests Daryl Braithwaite, Baby Animals, The Black Sorrows (with Vika and Linda) & 1927. Shows in the first run – which was announced earlier in the year featuring headliner Queen of rock Suzi Quatro – have already sold-out, or are almost at capacity. This second all-Australian line-up is guaranteed to sell-out well before 2018.

Promoter Duane McDonald says the return of John Farnham as a headliner on the Red Hot Summer Tour is by popular demand. “Audiences loved seeing John Farnham as part of the 2017 sold out tour,” he says. We’ve joined together an incredible Aussie line-up, some artists who have been part of the Red Hot Summer Tour family for a long time and some who we are newly welcomed to the stage. It is going to be a massive summer! We are taking the festival into some towns and venues that we have never played at before – look out, it is going to rock!”

After a sell-out run in the 2017 Red Hot Summer Tour, John Farnham – the voice of the Australian music industry returns for 2018. Revered as one of the best male vocalists – by both fans and fellow musicians – he has had an incredibly versatile career. His 1986 album Whispering Jack was the first record to sell over a million copies in Australia and its chart topping single You’re The Voice cemented the honey toned solo artist as the ‘voice’ of the country. Over the next several years he released hit after hit, including Pressure Down, Reasons, A Touch of Paradise, Age of Reason, Two Strong Hearts, Angels, Talk of The Town, Chain Reaction, Burn For You, Have A Little Faith (In Us) and That’s Freedom to name a few. Audiences will have the chance to celebrate five decades of great music when John takes to the stage on the 2018 run.

A long-time supporter of the Red Hot Summer Tour, Daryl Braithwaite puts on an incredible performance. He is one of the most recognisable voices in the Australian music scene, and with a diverse career that has spanned decades. Daryl’s consistency as a performer has never wavered, something that sees him performing regularly to packed crowds around the country. Starting his career in the 1970s as the frontman for Sherbet, Daryl was crowned King of Pop and the band produced 20 national Top 40 singles. In the 1980’s Daryl set out on his own solo career, releasing smash hit singles such as One Summer, As The Days Go By and Sugar Train to name a few. His anthemic version of The Horses is always a crowd-pleaser and a favourite for Red Hot Summer Tour fans.

Baby Animals burst onto the Australian scene in the 1990s with a solid rock force and a sassy lead singer. Suze DeMarchi proved that girls could rock just as hard as guys and the Baby Animals soon kicked some impressive rock butt with hits such as Rush You, Early Warning and One Word. The band scored themselves ARIA awards for best album and toured the globe. When they split in the mid-1990s they ended a special era of Australian music. The band’s inclusion again on the Red Hot Summer Tour line-up is a rare chance for music fans to see their original rock at its best.

Another icon of Australian music, Joe Camilleri, will be bringing his legendary band The Black Sorrows to the 2018 line-up. An incredible songwriter, Joe penned some unforgettable hits with The Black Sorrows, from tracks like Harley & Rose, Dear Children, The Chosen Ones, Never Let Me Go and Chained to the Wheel to Hold On To Me and New Craze. Any live show is guaranteed to get audeinces on their feet dancing. After the success of his first band Jo Jo Zep and The Falcons, Joe pulled together a group of musicians and launced The Black Sorrows. Since then, the band have sold more than a million albums worldwide, toured Europe (to sell-out shows) and won an ARIA for Best Band. The Black Sorrows, with Vika and Linda, will certainly put on a party for the Red Hot Summer Tour.

As a band, 1927 are known for their enduring hits – with a swag of classics such as That’s When I Think Of You, Compulsory Hero, To Love Me, Don’t Forget Me and If I Could, to name a few. They smashed onto the music scene with their quintuple platinum debut Ish in 1988, garnering themselves multiple ARIA awards. With countless live performances, 1927 have reached legendary status and their most recent release – Generation i – has earned them a whole new legion of fans. Their inclusion on the 2018 Red Hot Summer Tour is an exciting one indeed.

The Red Hot Summer Tour tickets are hotly in demand. Don’t miss your chance to be part of this special part of Aussie music festival history.

Tickets are on sale at 12pm on Thursday 24th August 2017 through Ticketmaster.