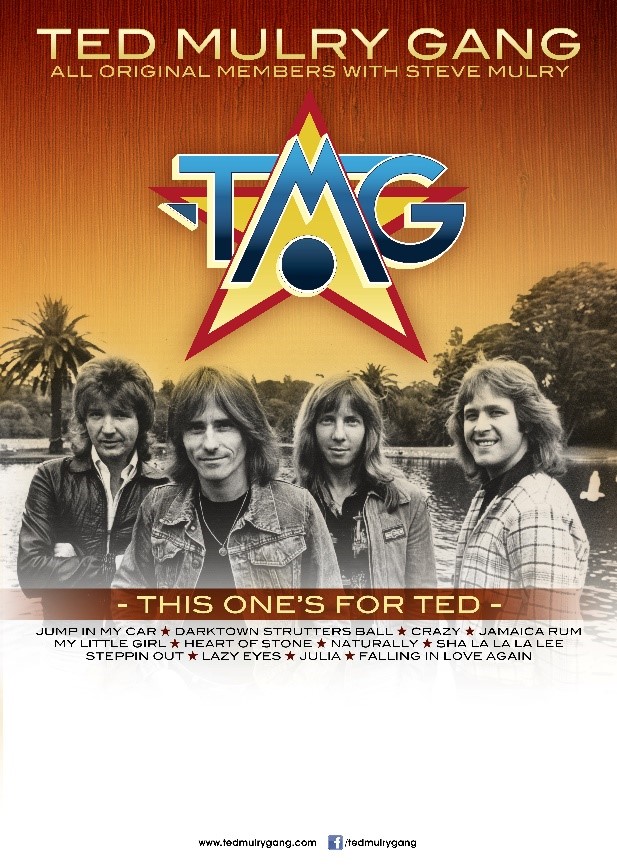 It Has Been 18 Years Since The Ted Mulry Gang (TMG) performed in the suburbs of Melbourne and regional Victoria. Now, with Ted’s brother Steve Mulry at the helm, and former AC/DC bassist Mark Evans joining the original members, TMG is back and they’re heading to the garden state for two very special gigs this October in St Kilda and Geelong. In true rock style, they’re doing it for Ted – paying homage to the man behind the music who passed away 16 years away and left behind a legacy that continues to live on.

TMG were a cornerstone of the 70s rock scene. Label mates with AC/DC on Alberts, TMG helped shape the guitar-driven sound of Aussie rock. Their 1975 smash hit Jump In My Car catapulted them to superstardom and they followed with a swag of crowd pleasers such as Darktown Strutters Ball, Crazy, My Little Girl, Heart of Stone, and (You’ve Got) The Devil In You to name a few. The respect the industry had for TMG was evident by the massive support shown by fellow musicians who put on a series of concerts to raise money to him after he was diagnosed with cancer in 2001. TMG recently banded together in Sydney for Ted’s Birthday Bash, celebrating what would have been his 70th birthday.

When the original line-up – Les Hall, Gary Dixon and Herm Kovac – came back together, it was a natural progression to call on Steve and Mark to help them bring TMG’s music back to the live stage. “We have known Steve since he was 10 and Mark has been a mate since the early days,” says Herm. “Our first rehearsal was two hours laughter, two hours playing, so we knew it was going to be fun. Having Steve in the band is sometimes like having Ted in the band. At times he sounds just like his brother when he sings, and when he chats to the audience. The only thing missing is the bass guitar, which Steve can’t play.”

Deciding to get the band back together was a chance to revisit all the great material produced by TMG. “Our agent kept hassling me to get the band back together and when I asked Mark to play bass, his response was ‘great, we can remind people of how great Ted and his songs were’,” says Herm. “If someone told me two years ago I would be playing drums again, and playing to packed crowds, I honestly would have laughed. Its been great and fun!”

Performing again after 25 years is surreal experience. It is great for the band to get back and play the songs that created memories for generations, and continues to have relevance today. “Ted was my best mate,” says Herm. “I do miss him turning around and grinning if someone made a blue or if there was someone interesting in the audience.”

Heading back to Victoria was always going to be on the cards once TMG reformed. “We have done some shows in Sydney and Brisbane, and word got out and we kept getting requests to come to Melbourne,” says Herm. “We have always done well in Victoria. Also, David Lang from Warners, who recently put together our re-release of our live album has kept at us to come down.”

The This One’s For Ted shows are exactly what the title says – each live show is performed exactly the way Ted would have wanted. “We will be doing all our hits, plus selected songs from our albums,” says Herm. “As Mark (Evans) was an original member of AC/DC, it is only fitting we do one of those too. Gary does an acoustic tribute to Ted by doing two of Ted’s biggest solo hits. We are also doing You’re All Woman, which Ted wrote, TMG originally did and Sherbet had a hit with.”

Don’t miss this special celebration as TMG pays homage to Ted Mulry with the This One’s For Ted shows in Victoria this October. Tickets are on sale now.