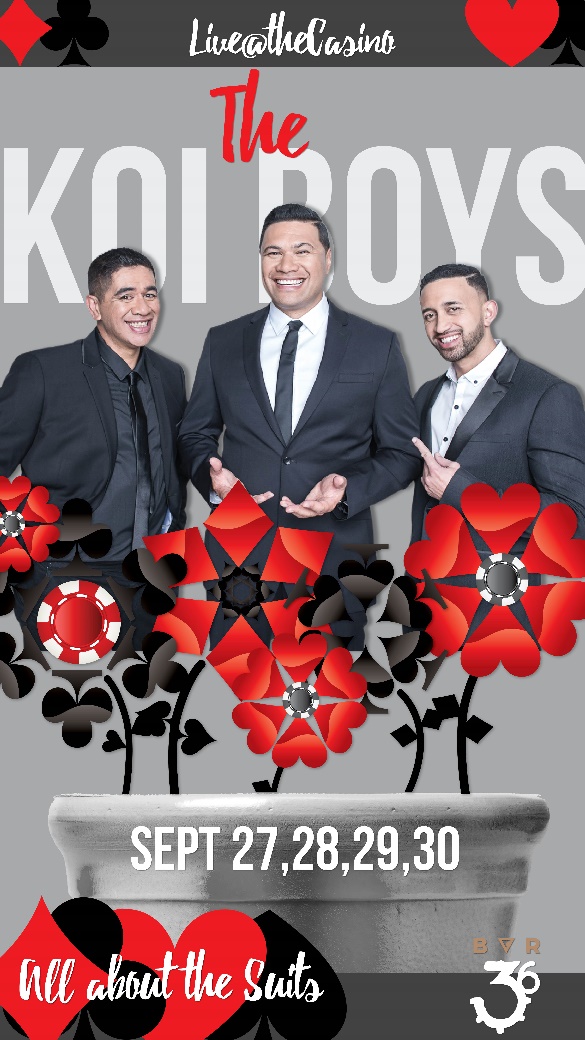 It has been a massive month for entertainment at The Reef Hotel Casino, and not content to stop yet, the team behind BAR36 are wrapping up September in spectacular style! And style it will be – after all, it is all about the suits – as the Gold Coast’s export The Koi Boys swing into town for four massive nights of soul!

New Zealand born, The Koi Boys are about to hit the big time! With their debut album Meant To Be slated for release late October – and already receiving acclaim for its nine genre spanning covers and three original numbers – The Koi Boys are the real deal. It’s no surprise they won the hearts of the nation on The Voice Australia – as the first ever trio to perform on the show, they enamoured both the judges and the public with their energy, enthusiasm, and their ability to sing just about anything. Cue outrage when they were evicted just sort of the finals – so much so that judge Jessie J fielded interview questions on why she decided to send them home.

The Koi Boys first single aptly demonstrates why Australia was endeared to Danny Faifai, Kevin Keepa and Ngahere ‘Nuz’ Ngatai in the first place. Cry To Me is an expressive cover of the 1962 hit originally recorded by Solomon Burke, made famous again in the 1980s on the Dirty Dancing soundtrack. The Koi Boys have managed to pay homage to an incredible song, but still put their own imprint on it – an auspicious task.

The Koi Boys upcoming performances at BAR36 will not only showcase songs they smashed out on The Voice, but also tracks from their new album. Recorded with producer Robert Conley – think Tina Arena, The Delta Riggs and Darren Hayes, to name a few – the album covers a raft of classic sounds from Motown, funk, RnB, pop, cabaret, reggae and even a bit of Latin.

On stage, The Koi Boys are tight – the all-singing, all-dancing, all-harmonising trio have been performing together for almost a decade and it shows. They traverse the great song catalogues from Motown to current pop hits, and everything in between, and their live session shows often sell out weeks in advance. Don’t miss The Koi Boys as they wrap-up September in style at BAR36.

The Koi Boys perform at BAR36 at The Reef Hotel Casino for four huge nights from Wednesday 27th September until Saturday 30th September 2017. Entertainment kicks off from 7.30pm nightly with Rhys Tolhurst.