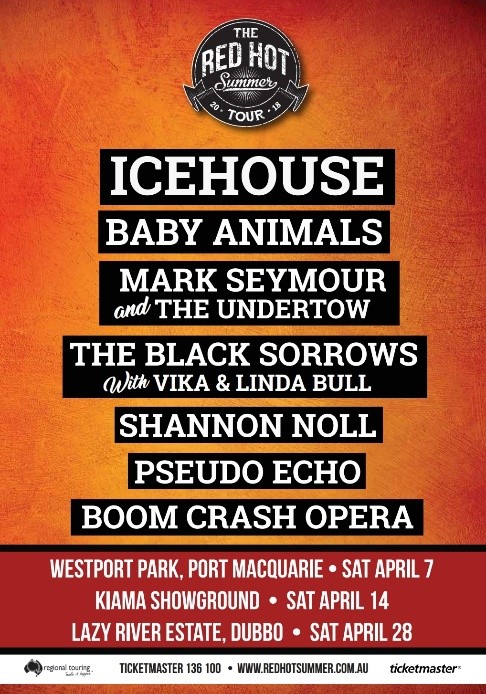 The Red Hot Summer Tour is smashing it out in 2018 with a swag of sell-out shows and two incredible line-ups touring the width and breadth of Australia. Now, the iconic summer festival announces its third and final leg for 2018 – and what a stellar line-up organisers have in store! Headlined by ICEHOUSE, with special guests Baby Animals, Mark Seymour & The Undertow, The Black Sorrows (with Vika & Linda), Shannon Noll, Pseudo Echo & Boom Crash Opera, these shows bring together the best of the best of Australian music!

Promoter Duane McDonald says 2018 is looking massive and the final announcement for the year is an exciting one. “Our passion is taking great Australian music out on the road to regional areas,” he says. “We are returning to some of the regions that have supported the Red Hot Summer Tour from its early years. We hope audiences are as excited about this huge line-up as we are!”

ICEHOUSE was formed by Iva Davies and is one of those bands who have managed to transcend age groups with a career spanning 40 years.  Generations of music lovers have been brought up with hits such as Crazy, Electric Blue, We Can Get Together, Great Southern Land, Hey Little Girl and Man Of Colours to name a few. ICEHOUSE has sold over three million albums locally, more than nine million internationally and has achieved 28 platinum album sales in Australasia. The band has had eight Top 10 albums and more than 30 Top 40 singles. ICEHOUSE and Iva Davies have won many awards including the Countdown Award for the Most Popular Male Performer and ARIA Awards for the Best Album and Highest Selling Album for Man of Colours. The band was inducted in the ARIA Hall of Fame in 2006. In June 2013 Iva was made a Member of the Order of Australia (AM) for ‘significant service to the music and entertainment industry’ as a songwriter and performer, and to the community and, just last week, the band received a further honour when Qantas announced they had named a new plane after Great Southern Land. One of Australia’s greatest live acts, they are set to present a show not to be missed.

Baby Animals burst onto the Australian scene in the 1990s with a solid rock force and a sassy lead singer. Suze DeMarchi proved that girls could rock just as hard as guys and the Baby Animals soon kicked some impressive rock butt with hits such as Rush You, Early Warning and One Word. The band scored themselves ARIA awards for best album and toured the globe. When they split in the mid-1990s they ended a special era of Australian music. The band’s inclusion on the Red Hot Summer Tour line-up is a rare chance for music fans to see their original rock at its best.

Continuing the legendary line-up, Mark Seymour & The Undertow have been included on the Red Hot Summer Tour for the first time. There isn’t much Mark Seymour can’t do and bringing his band to The Undertow to the stage means a walk through his impressive solo career and almost two decade assocation with band Hunters and Collectors. An illustrious songwriter, Mark has penned hit after hit, as well as turning his hand succesfully to composing for film scores, theatrical productions and acting. His eloquant musical style has endeared geneartions of fans, whether it is with his solo material or with Hunters classics like Tears of Joy, Holy Grail and When The River Runs Dry to name a few.

Another icon of Australian music, Joe Camilleri, will be bringing his legendary band The Black Sorrows to the 2018 line-up. An incredible songwriter, Joe penned some unforgettable hits with The Black Sorrows, from tracks like Harley & Rose, Dear Children, The Chosen Ones, Never Let Me Go and Chained to the Wheel to Hold On To Me and New Craze. Any live show is guaranteed to get audeinces on their feet dancing. After the success of his first band Jo Jo Zep and The Falcons, Joe pulled together a group of musicians and launced The Black Sorrows. Since then, the band have sold more than a million albums worldwide, toured Europe (to sell-out shows) and won an ARIA for Best Band. The Black Sorrows, with Vika and Linda, will certainly put on a party for the Red Hot Summer Tour.

With ten consecutive Top 10 singles in the charts, it’s fair to say that Shannon Noll has earned his place in the Aussie rock industry. The country boy first came to prominence thanks to his stand-out performances on the first series of television talent show Australian Idol. He has been nominated for several ARIA awards and has won the Best Male Artist accolade at the MTV awards three years in succession. With hits like his unforgettable cover of What About Me, as well as tracks such as Drive and Lift, to name a few, he is the average bloke who just happens to have a huge music career.

Pseudo Echo are bringing all the fabulousness of the 1980s to the Red Hot Summer Tour. The band are well revered for their chart-topping run which featured classic hits such as Funky Town, Don’t Go, Living In A Dream, Listening and A Beat For You. The band sold in excess of one million albums worldwide and spurned a #1 single on the US Billboard Dance Charts. They celebrated seven Top 10 singles in Australia, and top charting singles in the UK, Canada, Sweden and Finland. The band’s electro-pop sound still gets audiences on their feet and their music is quickly being embraced by a whole new generation of fans.

With songs like Onion Skin, Hands Up In the Air, Bettadaze and The Best Thing to name a few, Boom Crash Opera embody the spirit of 80s and 90s Australian rock. With super-talented Andrew De Silva taking on lead vocals, there are few Aussie music fans who wouldn’t be familiar with the band’s impressive back catalogue. Boom Crash Opera smashed onto the music scene with their debut single Great Wall in the mid-80s and never looked back. Described as one of the country’s most underestimated pop phenomenas, it is in their live shows that Boom Crash Opera really shine. A Boom Crash Opera show ensures audiences are on their feet from the start to the finish, an enviable quality for a band and the perfect inclusion on the Red Hot Summer Tour.

Tickets are on sale at 9am on Thursday 26th October 2017 through Ticketmaster. 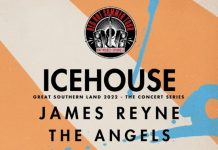