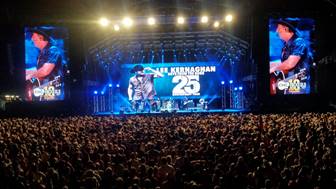 For country icon Lee Kernaghan, 2017 has been a massive year! Celebrating a milestone 25-years in the industry, including the silver anniversary of his debut ARIA-award winning album Outback Club, the Aussie superstar has spent a solid 12-months on the road, playing sold-out shows around the country. The Boys From The Bush 25th Anniversary Tour saw Lee travel perform in some of his favourite regional towns, some huge metropolitan venues and at some of Australia’s key festivals. The 2017 leg of the tour saw an incredible 25 sell-out shows – fitting for a 25th anniversary tour – wrapping up at The Palms at Crown in Melbourne with two packed houses on the weekend (November 17 & 18).

While some may kick their heels up and rest for a bit, that’s never been Lee Kernaghan’s style, so – due to popular demand – Lee is keeping the party going by announcing a swag of dates for 2018 to ensure The Boys From The Bush 25th Anniversary Tour covers as much of Australia as possible. Kicking off the 2018 dates at Tamworth Country Music Festival, the leg will include a host of other festival dates, as well as some more great suburban shows.

The Boys From The Bush tour features Lee’s classic hits, ballads and rural anthems that have won the country legend a nationwide legion of fans that he prefers to call ‘mates’. With 34 number one hits to his credit, the show celebrates Lee’s career, and even more than that – it celebrates the fans who have been there from the beginning – and joined in along the way.

Tickets to the Boys From the Bush – 25th Anniversary Tour 2018 dates go on sale from today.

THE BOYS FROM THE BUSH 25TH ANNIVERSARY TOUR 2018 DATES