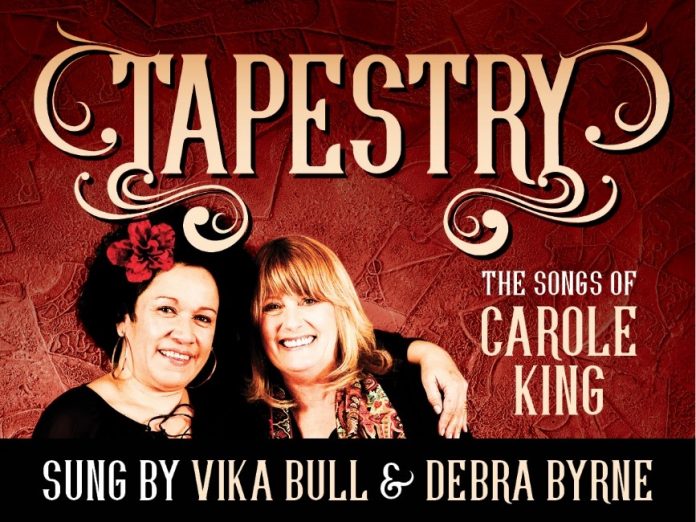 The acclaimed Tapestry: The Songs of Carole King tour has been travelling Australia for the past two-years, garnering acclaim for the phenomenal performances of its leads, Australian icons Vika Bull and Debra Byrne. Now, the show that pays homage to Carole King’s seminal 1971 album Tapestry, returns in 2018 for a string of regional shows throughout Victoria and New South Wales in February and March. The beautiful celebration offers an unforgettable interpretation of this legendary long-player.

Released in 1971 Tapestry was Carole King’s sophomore album. It picked up four Grammy Awards in 1972 – including Album of the Year – and came in at #36 on Rolling Stone’s list of the 500 Greatest Albums of All Time in 2003. It was #1 on the Billboard 200 Chart for 15-weeks and sold over 25-million copies world-wide. Produced by Lou Adler (The Mamas & The Papas), it is still considered one of the greatest selling albums of all time, even 45 years after its release. It was inducted into the Grammy Hall of Fame in 1998.

Classic tracks include I Feel The Earth Move, You’ve Got A Friend, (You Make Me Feel Like) A Natural Woman and Will You Love Me Tomorrow. An iconic singer-songwriter, Carole King has been re-imagined and covered by some of the biggest names in pop music, including James Taylor, Martika, Quincy Jones, The Shirelles and Aretha Franklin to name a few.

The Tapestry album is timeless and unsurprisingly, it holds a very special place in many artist’s hearts. For Debra, Carole King’s music resonates on a different level. “Her songs have been a life saver, she has spoken to my heart when it has broken and helped me regain my strength through songs such as You’ve Got A Friend,” she says. “My favourite of all her compositions is Up On The Roof. Tapestry the album continues because of its authenticity, honesty and love. A true singer-songwriter Carole King doesn’t write to get on the radio; she writes because it’s all coming from her heart. That is why I love her.”

For Vika, there is something special about performing the music of Carole King to audiences. “I am just in awe of the fact that Carole wrote so many wonderful songs that I still love so much today,” she says. “I was only discussing her the other day with friends, and we were all shaking our heads at her song list and couldn’t quite believe it. Her songs don’t date – she can write a wonderful melody, she is awesome.”

Tapestry: The Songs of Carole King is an authentic re-imagining of one of the biggest selling and most revered albums in the pop music canon. Night after night, the show is welcomed by audiences everywhere and formidable household names, Vika and Debra truly do the song catalogue, and the legacy of the Tapestry album justice. It is an unforgettable show, jam-packed with hits from start to finish.

Vika is a multi-platinum artist and has been known to transcend genre in her versatile and emotionally-driven performances. She smashed onto the music scene in the late 80s, singing back-up vocals with her sister Linda in the blues-rock band The Black Sorrows and has since forged a diverse pathway into soul, gospel, blues, country and the island music of her Tongan ancestry. She has released eight albums with her sister – Linda – as well as collaborating on studio and concert performances with a veritable who’s who of the industry, including Paul Kelly, John Farnham, Kasey Chambers and John Butler, to name a few. She has also been an integral member of the incredibly successful show At Last – The Etta James Story.

Debra is an original cast member of Young Talent Time and has performed in a variety of musical theatre productions, including Cats, Jerry’s Girls, Sunset Boulevard and Les Miserables. An Australian music icon, she has been in the industry since she was 14, and was only 16 when she won a Logie and was named Queen of Pop. She has released three solo albums, an autobiography and has appeared in numerous Australian television productions, including Fat Tony and Co.

Tickets for the regional run of Tapestry: The Songs of Carole King are on sale now.