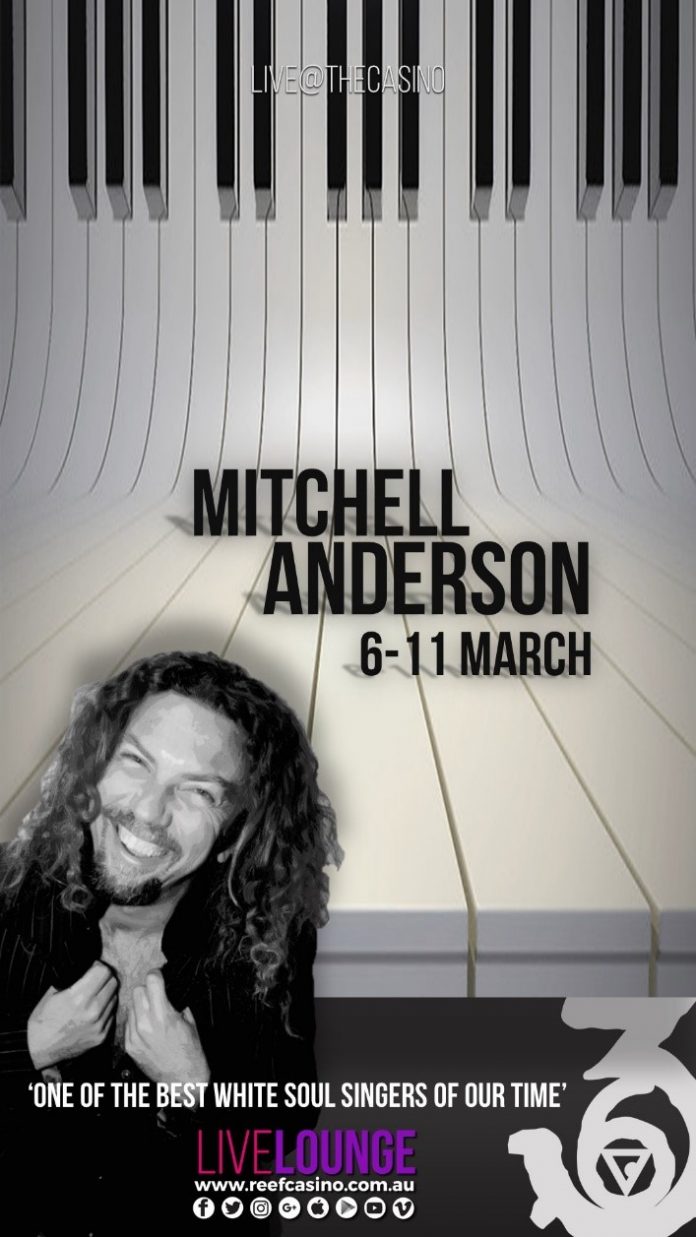 Mitchell Anderson is back – returning to BAR36 for six jam-packed nights of incredible soul music! The last time this revered musician performed at The Reef Hotel Casino, he packed the house, and week-long residency promises to be no different.

Considered one of the best ‘white soul singers of our time’ Mitchell Anderson is a familiar face to Australian audiences. He won hearts around the nation with his emotionally charged, heartfelt performances on television talent show The Voice in 2013. He ended up as a finalist on Team Seal, garnering acclaim throughout the show from his incredible vocal diversity.

Just some of his performances that stole hearts during his time on The Voice include classics such as Sexual Healing, Take Me To The River and the much-talked about ‘vocal battle’ between Mitchell and Steve Clisby Walking In Memphis that was touted as the “best battle ever” by critics. Throughout his time on the show, Mitchell demonstrated his ‘pub-rock’ chops, and it was evident he was a seasoned and impressive performer who could aptly handle any genre thrown at him.

Marking more than two decades in the music industry, Mitchell continues to write and perform sellout shows wherever he goes and his continually earning rave reviews. With a live album under his belt and his debut studio album in the works, his upcoming show will not only showcase songs from this forthcoming release, but also some all-time favourites from artists such as Joe Cocker, The Bee Gees, Marvin Gaye and Al Green to name a few.

In what was one of heralded as an unforgettable performance, Mitchell will again perform with his incredible solo set on the BAR36 ‘steampunked’ piano. The piano, the pride and joy of BAR36, was designed specifically with a musician such as Mitchell Anderson in mind. Mitchell’s residency is a mix of his acclaimed solo shows and full band soulful extravaganza!

Don’t miss Mitchell Anderson as he returns to BAR36 at The Reef Hotel for a week-long residency this March – bringing the best of soul to the Far North!

Mitchell Anderson performs at BAR36, The Reef Hotel Casino from Tuesday 6th to Sunday 11th March 2018. Mitchell kicks off the show at 8pm on Tuesday, Wednesday and Thursday with his solo repertoire. Friday and Saturday night are full band shows, starting from 9.30pm. Everything chills down on Sunday for a Sunday session early evening at 6.30pm with Mitchell and his band. These are non-ticketed, free shows in BAR36.