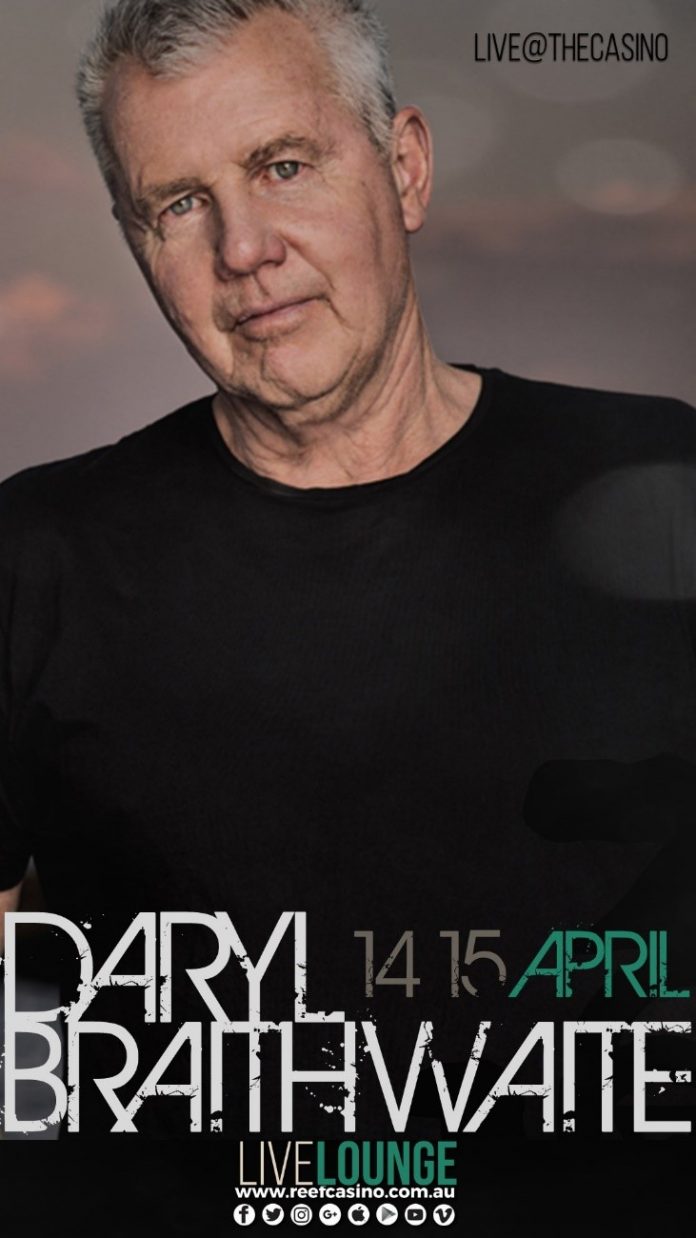 April is an exciting month indeed at The Reef Hotel Casino. Festival favourite Daryl Braithwaite returns to BAR36 for two massive nights and audiences are in for a treat as he heads to Cairns to celebrate the Comm Games at the Casino. After getting inducted into the ARIA Hall of Fame last year and performing at a string of sold-out Red Hot Summer Tour festival shows across this summer, Daryl is in fine form for putting on a massive show. Over the past decade, he has become a firm favourite on the festival circuit, even performing at Falls Festival in 2017. It is no surprise audiences love him, with a string of hits that are sing-a-long favourites, every Daryl Braithwaite concert is a party from start to finish.

As easily one of the best voices in the Australian music industry today, Braithwaite has a bevy of hits ranging from his 1970s rein as King of Pop in the satin clad sensations Sherbet to the strong body of his solo work. His concerts are jam-packed with hits from his 1980’s Number One album Edge to his early 1990’s release Rise which spurned the Australian Music Award 1991 ‘Australian Song of the Year’ Number One single and popular crowd pleaser The Horses. Daryl’s music embodies the spirit of Oz, and with hits like One Summer, As the Days Go By, Rise and Sugar Train to name a few, his impassioned vocals have provided a soundtrack to the seasons and times of Queenslanders.

Daryl Braithwaite rose to prominence as the front man for 1970’s pop legends Sherbet. The band produced 20 national Top 40 singles and hold pride of place for being the first band to top the one million dollar mark in album sales in the country. They released a massive 15 albums and 30 singles. Classic songs such as Summer Love are still radio favourites today. Their most well-known classic, Howzat, was not only a #1 hit in Australia, but also earned them international acclaim, hitting the charts in England at #2. Daryl was also crowed King Of Pop multiple times.

Kicking off his solo career, Daryl became known as a household name not just for his time as Sherbet, but also as a performer in his own right. His released early solo recordings before taking a small hiatus and returned to the industry full force in the late 1980s. Since then he really hasn’t stopped performing and spends each year touring back-to-back around the country, playing to massive crowds at different venues and festivals. Most recently, he featured on the acclaimed Carole King tribute album Beautiful singing the iconic track Up On The Roof.

With his biggest solo hits, some new material and the odd Sherbet classic, Daryl Braithwaite’s performance is tight and sharp, and guaranteed to have the audience singing along. These special shows at The Reef Hotel Casino will be a great party – don’t miss Daryl as he brings his unforgettable show North for two nights!

Daryl Braithwaite performs at BAR36 at The Reef Hotel Casino on Saturday 14th and Sunday 15th April 2018. Local Cam Cusack opens each show, with the Tall Poppies keeping the party going til late on the Saturday night. Shows start at 9.30pm on Saturday and 8.30pm for the Sunday Session.