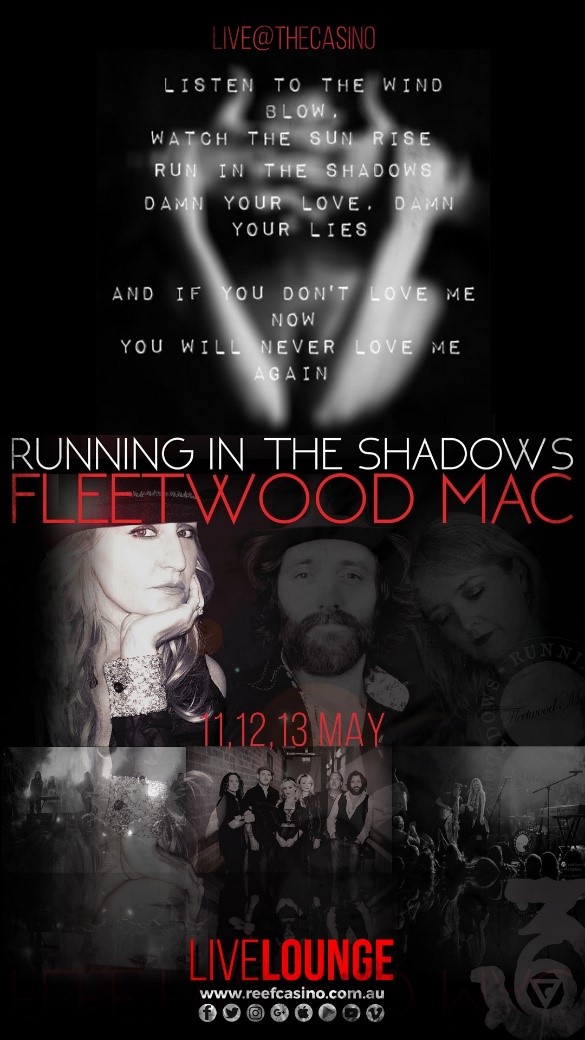 They’ve sold more than one hundred million albums world-wide and been inducted into the Rock and Roll Hall of Fame – Fleetwood Mac’s songs are part of international music history. Now, the acclaimed The Australian Fleetwood Mac Show Running In The Shadows are heading to the Far North to pay homage to the superstar band for three nights this May. The six-piece rock band explore Fleetwood Mac’s extensive back catalogue, covering all the classic ballads, blues and rock songs from their five decade plus career.

The Australian Fleetwood Mac Show are always on the road, in one year they performed more than 52 shows at some of the southern state’s largest venues, often selling out. Formed in 2000 by musicians Gary Stewart and Ursula Cain, the band also features lead guitarist Eddy Santacrue, bassist Bill Kervin and drummer Lloyd G. many of the band members have long music careers within Australia, playing the rock circuit.

Fleetwood Mac are one of the most iconic bands in the world today. Formed in the 1960s, they are considered one of the world’s best-selling bands, they have won multiple Grammy Awards. They have also received a Brit Award for Outstanding Contribution To Music, among other accolades. They have spawned some of the biggest songs in recent memory, many of which are still on high rotation across radio stations world-wide today. With tracks like Rhiannon, Landslide, Go Your Own Way, Dreams, The Chain, Tusk, Sara and Big Love to name a few, they carved music history and their music is appreciated by young and old.

Don’t miss The Australian Fleetwood Mac Show Running In The Shadows as they explore the iconic music of Fleetwood Mac.

The Australian Fleetwood Mac Show performs at BAR36 at The Reef Hotel Casino on Friday 11th, Saturday 12th and Sunday 13th May 2018. Entertainment kicks off from 9pm on the Friday and Saturday nights, with an earlier start at 7.30pm on Sunday. *** Live at the Casino shows in BAR36 are non-ticketed shows. For more information, please visit www.reefcasino.com.au