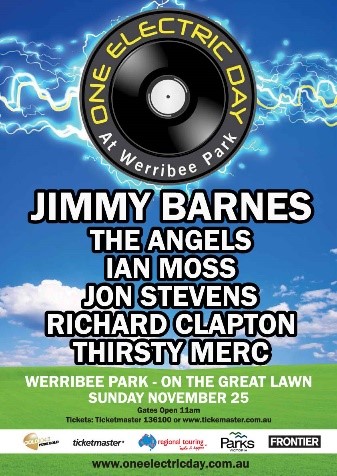 There is no doubt ONE ELECTRIC DAY is one of Melbourne’s favourite festivals. Celebrating its sixth annual event in 2018, the day at Werribee Park has sold-out every year, with ticket allocations exhausted within minutes in 2017. Sporting one of the biggest line-ups yet, the 2018 ONE ELECTRIC DAY will certainly follow suit. Headlined by Australian rock icon Jimmy Barnes, and including the likes of the legendary The Angels, Ian Moss, Jon Stevens, Richard Clapton and Thirsty Merc, this is the epitome of an Oz rock festival.

Promoter Duane McDonald says the buzz surrounding the event has been building all year and he can’t wait to share the line-up with fans. “ONE ELECTRIC DAY is such a great family event that we see people adding it to their calendar year-after-year,” he says. “It is such a good feeling to see familiar faces each year – many of whom have been attending since day one. Last year sold-out so quickly and we anticipate this year will be the same. The 2018 line-up includes the best of the best of Australian music royalty and we are proud to bring them all to the ONE ELECTRIC DAY stage.”

Jimmy Barnes needs no introduction to Aussie rock music lovers. As a legend both from his time fronting Cold Chisel and his top charting solo career, he has an enviable back catalogue that makes for incredible live performances with songs like Working Class Man, When Your Love Is Gone and No Second Prize to name a few. Recently he has been on the road with the Working Class Man: An Evening of Stories and Songs celebrating his career and best-selling memoir. No stranger to performing at ONE ELECTRIC DAY, Jimmy returns in 2018 by popular demand.

When it comes to great Aussie rock, it doesn’t come much better than The Angels. It’s been over four decades since brothers Rick and John Brewster co-founded the iconic band and have penned some of Australia’s most anthemic tracks. The Angels are widely reputed for their killer live shows. With hits like Long Line, Marseille, Be With You, After the Rain, Shadow Boxer and Mr Damage to name a few. In 2018 The Angels are celebrating the 40th anniversary of their seminal album Face To Face. Audiences need to get ready to rock when The Angels take to the stage at ONE ELECTRIC DAY.

Ian Moss is reputed as one of the country’s premier guitarists and it isn’t hard to see why. He is renowned for his songwriting, vocals and his live performance. Both with Cold Chisel and in his solo career, he has written some of the songs that have become part of the psyche of Australia. Songs like Tucker’s Daughter and Telephone Booth in his solo career ensured Ian Moss will always be a household name. With a swag of ARIA awards to his name, international tours to pretty much everywhere, and too many #1 hits to mention, he is an icon in the Australian music industry.

For lovers of great music, a concert experience with Jon Stevens is up there with the best. From his Noiseworks days – and hits such as Welcome To The World, No Lies, Touch and Hot Chilli Woman – to fronting The Dead Daisies and INXS, he has made an indelible impact with his amazing vocals. Jon also has an incredible solo catalogue, the most recent of which Starlight saw him do a run of sold-out dates last year. His live shows are dynamic, high energy and will keep audiences on their feet.

Richard Clapton is one of Australia’s legendary rock artists. With songs such as Deep Water, Capricorn Dancer and Girls On The Avenue in his arsenal, Richard has captivated audiences for decades. He released his debut Prussian Blue in 1973 and has never looked back. Still making music and still performing to packed houses, he is a true pioneer of the rock scene.

It’s hard to believe it has been over 15 years since Thirsty Merc smashed onto the scene with his such as Someday Someday and In The Summertime. Lead singer Rai Thistlethwayte proved himself to be a world-class songwriter and the trio performed far and wide. Having recently celebrated their 15-year anniversary with a national tour, the return of Thirsty Merc on the festival circuit will be embraced by audiences.

General public tickets go on sale 11am on Friday 18th May 2018 through Ticketmaster.