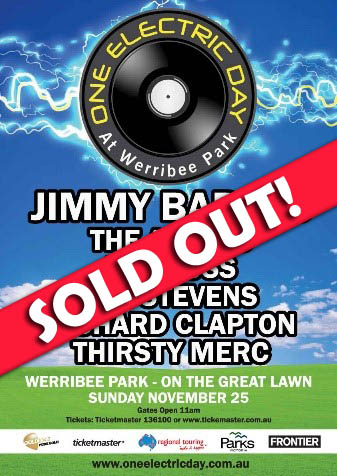 Melbourne’s rock music festival ONE ELECTRIC DAY has sold-out for the sixth year in a row, in record time. Tickets went on sale for the November one-day event at Werribee at 11am today. Earlier in the week, pre-sale tickets also sold-out the allocation before the end of the pre-sale period. ONE ELECTRIC DAY will see more than 10,000 music fans rock out with the likes of Jimmy Barnes, The Angels, Ian Moss, Jon Stevens, Richard Clapton and Thirsty Merc.

Promoter Duane McDonald says the support shown by Melbourne audiences each year for the event is fantastic. “When we launched the first ONE ELECTRIC DAY in 2013, we were blown away that the event sold out,” he says. “Every year, we have been selling out quicker and quicker, and thanks to the Melbourne music loving public, ONE ELECTRIC DAY has become a special part of people’s entertainment calendars. We have fans who follow our announcements each year and block out the date in their diaries. It is an incredible day out, embraced by all ages, and we are excited to be able to create those memories year after year.”

With the return of Jimmy Barnes to the ONE ELECTRIC DAY franchise in 2018, fans will be treated to the best of the best of Aussie rock. Duane says pulling together the programming for the event each year is always exciting. “We have a great amount of Aussie talent out there, and it is a pleasure to be able to bring them together on the one stage,” he says. “Barnesy is no stranger to ONE ELECTRIC DAY and it is great to bring him back, by popular demand. Adding the likes of The Angels, Ian Moss, Jon Stevens, Richard Clapton and Thirsty Merc means we have one hell of a legendary line-up. It is great that music fans think the same thing and have snapped up their tickets for November.”

With tickets sold-out of the November 25 festival, Duane wanted to extend a warning to music fans not to be lured into buying tickets from non-authorised re-sellers. “The only authorised ticket seller for ONE ELECTRIC DAY was Ticketmaster,” he says. “Any tickets sold anywhere else are not guaranteed and we hope music fans will steer away from ticket scalping sites. We want everyone to enjoy live music and not be taken advantage of.”