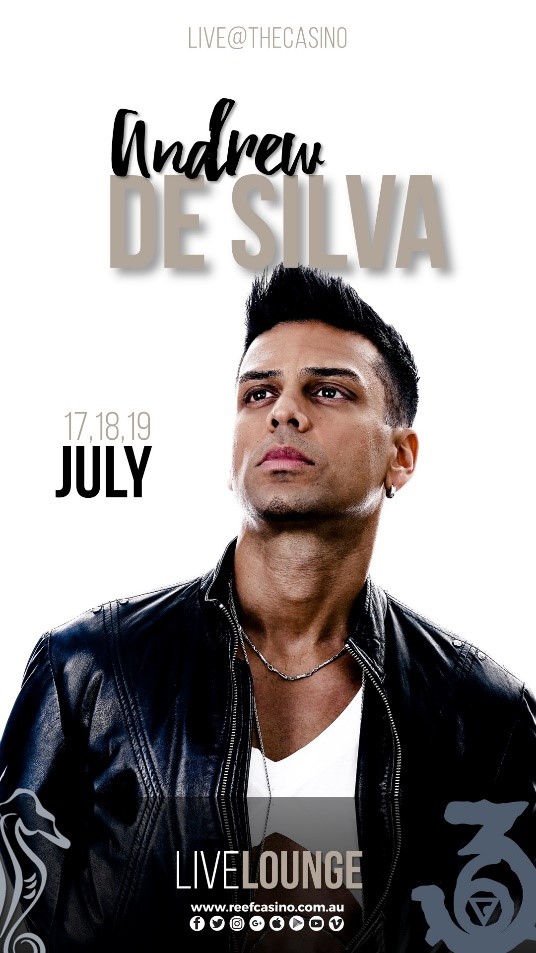 In 2017, Andrew De Silva not only brought his Purple Revolution show to BAR36, but he also performed three packed out nights with his own solo material. Thanks to overwhelming requests, he will be back in 2018. Following on from his Prince-tribute performances in early July, Andrew will take to the BAR36 stage for three more nights of accliamed music. This is a chance to get the week started right, in true party style!

There is not much that musician Andrew De Silva can’t do. The original frontman and primary songwriter for 1990s R&B group CDB keeps proving time and again that any performer worth their salt can do anything musically if they have the talent. Now, he is heading to the Far North for a massive week of shows, kicking off with three solo nights at The Reef Hotel Casino performing some of his biggest hits.

For those brought up in the 1990s, CDB provided a soundtrack to growing up. Their smash hit Let’s Groove was a favourite in CD-Walkmans everywhere and won Andrew and bandmates an ARIA for Highest Selling Single. CDB were known for their vocal harmonies, which saw them tour the world and achieve certified platinum sales.

Before stepping into the limelight, Andrew was already well-versed in the way of music, playing since he was a child. He effortlessly steps between musician – singer – producer – writer – being dubbed an ‘all-rounder’. It is no surprise then that many call on his assistance in the studio, and on the road. He has worked behind-the-scenes on major productions such as X-Factor and Australian film Terminus. His current solo single Rocket Science goes further to demonstrate his versatility as a performer.

Fast forward from the 1990s to 2012 and Andrew De Silva stepped back into the spotlight as a solo performer within his own right, wowing judges and audiences alike on Australia’s Got Talent, eventually taking home the top gong on the show. He demonstrated he was the ‘real deal’, and showed fans and critics that talent always shines through. Throughout his career he has also opened for international heavyweights such as Mariah Carey, Boyz II Men, and Shaggy, to name a few.

In 2016 Andrew was announced as the new lead singer for iconic Australian pub band Boom Crash Opera, taking over the departing vocal duties of Dale Ryder. Adding another feather to his cap, this accomplished musician has once again extended his talent to a new genre, and effortlessly made it his own. Add to that his acclaimed show Purple Revolution: A Tribute To Prince, that has been touring to packed houses and rave reviews and it is true – there is nothing much that Andrew De Silva can’t do!

Don’t miss Andrew as he takes Far North Queensland audiences on a journey through his career so far – for three nights only at The Reef Hotel Casino.

Andrew De Silva performs at BAR36, The Reef Hotel Casino from Tuesday 17th until Thursday 19th July 2018. Andrew’s performances kick off at 7pm on Tuesday, and 8pm on Wednesday and Thursday.