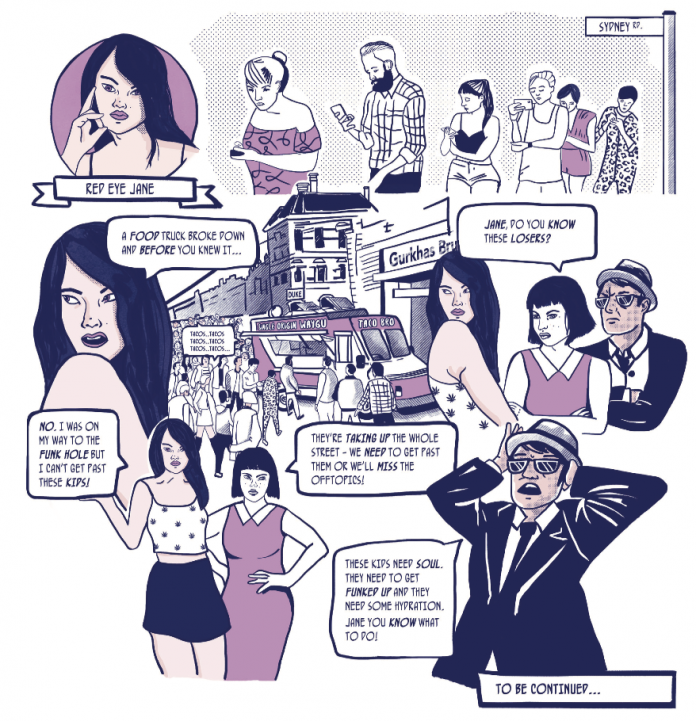 Melbourne’s The Offtopics have been working their basses off of late, getting the next installment of their four-part comic cover single series finished. What started as a nugget of an idea to pay homage to comic book culture through a series of vinyl releases complete with cover narration has blossomed into a full-blown art project for the band. The Offtopics released the first of the singles in late 2017 – Sunrise in Richmond – and so began the comic story with its ‘to be continued…’ tale. It continued with Funky Grandma in early 2018 and ramps up again with A Man Needs Cooling where the story continues to unfold. The trilogy of singles, of which the latest release is the third, will culminate in a vinyl EP, and the crux of the story.

To celebrate the release of A Man Needs Cooling, The Offtopics are gearing up to do what they do best, take to the stage and get their boogie on for a special launch show in Brunswick this month. Like everything the band does, there is a story behind the launch itself – planned at the Mechanic’s Institute – the venue where way back when The Offtopics played their first ever gig. It is fortuitous as well that the concert is happening in the heart of Brunswick, as the story in the comic series also unfolds in Sydney Road.

The band’s Funk Dynamo Polash Larsen says the show is going to be a toe-tapper. “For this show, we are going to push the seating back to create a dance floor,” he says. “We’ll move the bar into the theatre and party like its December 31, 19 years ago. Supporting us will be a new pop trio called The Fix Ups. We’ll screen our film clip and then The Offtopics will perform our brand of punch-drunk funk and scatological ska.”

The film clip for A Man Needs Cooling is the embodiment of what makes The Offtopics appealing to audiences. It is their quirky sense of humour mixed in with their infectious musical style that translates across to their songwriting and live performances. The clip – filmed with documentary maker Patrick Stapleton over an almost three-hour period at Daddy Bar one evening – came together in a rather organic nature.

“Generally, musicians don’t make for good actors, but I think we got some good screen performances without too much pain,” says Polash. “It was however, a bloody hot night and you can see how sweaty I am, which I feel is in keeping with the protagonist’s struggle. In A Man Needs Cooling our hapless everyman feels an instant infatuation with the woman of his dreams. He longs to connect with her but feels an attack of the nerves if she even looks in his direction.  Feeling hot under the collar he tries to calm himself with long, cool drinks of water.  Eventually the star-addled lovers meet (thanks to her taking the initiative) but… HE’S NOW BUSTING TO HAVE A WEE!  What a conundrum!  It’s a scenario that I’m sure all listeners can relate to.  Well, perhaps some can’t relate to it, but they’re probably blessedly confident people who’ve never been undone by their own desire to impress someone they’re attracted to. This song isn’t for them. They don’t need it.”

The track A Man Needs Cooling is what you would expect of The Offtopics – jam-packed with slinky guitar, fat horns, blokey backing vocals and ‘some nice vibraslap type percussion action’. The theme in the song itself embraces the slapstick soul that the band do so well.

“As much as The Offtopics songs are about partying in the suburbs they’re also often about thwarted sexual attraction,” says Polash. “Let’s face it, sex is both undignified and hilarious. Or at least it is if you’re doing it right.  This song stylistically ties in with the performance of the Funk Dynamo persona as a kind of budget Tom Jones.  He doesn’t let the fact that he’s short, thickset with thinning hair hold him back.  He’s going to enthusiastically twerk and gyrate right up until the moment he falls off the stage.”

For more information on the band, please visit www.theofftopics.com 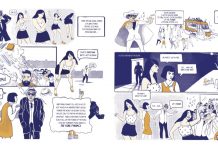 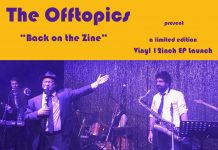 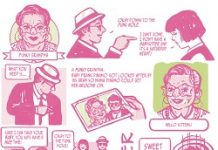