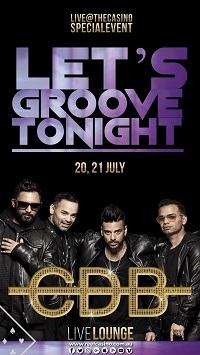 Cairns, get ready to groove – hit-makers CDB are coming to town! For those brought up in the 1990s, CDB provided a soundtrack to growing up. Their smash hit Let’s Groove was a favourite in CD-Walkmans everywhere and won them an ARIA for Highest Selling Single. CDB were known for their vocal harmonies, which saw them tour the world and achieve certified platinum sales.

Well revered for their R&B style, CDB featured Andrew De Silva, Brad Pinto, Gary Pinto and Danny Williams. Formed in Melbourne in 1991, the vocal quartet were reputed around their hometown for their urban live shows. Their debut release – Glide With Me (1994) – went Platinum in Australia and even hit the Top 5 in France. The subsequent single – Let’s Groove – was the best-selling single in Australia in 1995.

They toured far and wide, sharing the stage with the likes of Boyz II Men, K-Ci & Jo-Jo, Desiree and Tina Arena. During this time they also performed in Seoul to an area housing 100,000 music fans, that show was also broadcast to an audience of 17-million people worldwide. The band’s second album Lifted (1997), saw more successful singles, including Good Times and Back Then.

Outside of CDB, the four acclaimed musicians have all had their own successful ventures. Andrew De Silva won the 2012 season final of Australia’s Got Talent and is on the road with his show Purple Revolution. He has established himself as a respected recording artist, songwriter and producer. Gary Pinto is the vocal director of X-Factor, having mentored artists such as Samantha Jade, Dani Im and Will Singe to name a few. Brad Pinto is another accomplished songwriter, including writing the Triple J Hottest 100 hit single Boys Like You with rapper 360.

Don’t miss these two massive party nights as CDB get ready to groove at The Reef Hotel Casino this July.

CDB performs at BAR36, The Reef Hotel Casino for two nights, Friday 20th and Saturday 21st July 2018. Show starts at 9pm with support from Big Noise and The Tall Poppies. *** Live at the Casino shows in BAR36 are non-ticketed shows.