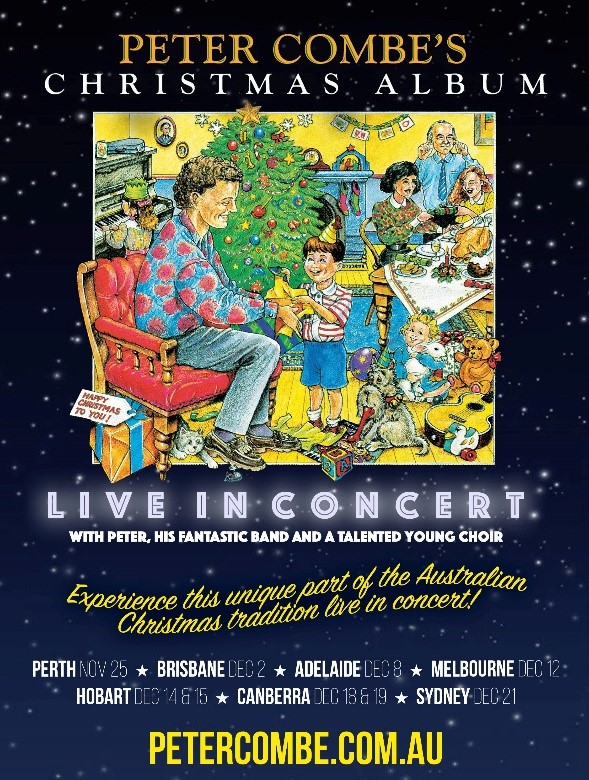 Experience this unique part of the Australian Christmas tradition live in concert with Peter, his fantastic band & a talented young choir

With a career that spans more than three decades, it’s fair to say that beloved children’s entertainer Peter Combe has more than a few favourite albums under his belt. He has released 15 albums of all original children’s material (not including greatest hits or live CDs) throughout his career, and one of his all-time favourites, and one that is still touted as the most cherished among his fans is his 1990 Christmas Album release. For years, Peter has been asked when he will be performing all the songs from the album at concerts and now, 28 years after its first release, he is finally taking Peter Combe’s Christmas Album out on the road for a special run of shows.

Nothing quite says Christmas like tradition – and Peter Combe’s Christmas Album has become a precious tradition for many families each Christmas. The 17-track Christmas Album of all original festival-themed songs has become an album that been embraced across generations and is still as loved as when it was originally released. The 1990 album landed its way firmly in the ARIA Albums Top 50 Chart and went GOLD in 5 weeks – an impressive feat for a Christmas album, and a Christmas album of all original material.

For Peter – who is loved Australia-wide for tracks like Wash Your Face In Orange Juice and Newspaper Mama to name a few – the Christmas Album holds a special place in his heart, and his children’s. It was his son Thom who suggested it was time to take the album out on the road, after seeing the requests his father received each year to perform tracks from the album. “I’ve been overwhelmed by the sheer volume of wonderful letters, emails, Facebook messages and many many more comments from families for 28 years expressing their love for this particular album,” says Peter. “I’ve been deeply touched by these expressions of love for the songs.”

The songs themselves are, as suggested, all about Christmas – and resonate with young and old, some religious and some secular. All were penned specifically for the Christmas Album and Peter went into the process back in 1990 with the focus of releasing a wholly original festive release. He didn’t want to record another album of traditional Christmas carols and songs. With his innate knack to get to the heart of what resonates with children, Peter Combe’s Christmas Album was embraced by children and adults alike, making it the only 100 per cent original Christmas album to reach the heights of such success. In fact, as far as Peter knows, it is the most successful recording of original Australian Christmas songs ever released!

“The album expresses the optimism of the Christmas message,” says Peter. “I like to think the audiences will be uplifted by the joy expressed in the songs and the care that went into the writing them. It was a genuine labour of love. Christmas is unique in that it can be appreciated at a deep level whether you are Christian, agnostic or atheist.”

One of the other things that makes Peter Combe’s Christmas Album special are the choirs that perform on many of the songs. Determined to bring that quality to the live performance, Peter is having special guests with him in each show. “I contacted high schools, private and public schools, in every capital city that I knew had great choirs,” he says. “The ages of the choir singing most of the songs on the album were 13-17, so the choirs in the concerts will be the same age. It’s the first tour ever in which I’ll be doing every show with a live band and a talented young choir. All the songs from Peter Combe’s Christmas Album will be performed in the concert plus four from my second Christmas album and a cameo by a young soloist. The shows will also feature beautiful projections and three videoclips.”

Peter is looking forward to taking his iconic album out on the road, kicking off the shows at the end of November and running right up until Christmas. His hope is that the events will be a special family affair – something parents and children alike can enjoy. Peter himself is taking his own son out on the road with him. “My son Thom, whose idea it was to embark on this project, will be playing guitar in at least seven of the shows with me,” he says. “My keyboard player, Phil Cunneen, who played on the Christmas Album in 1990 will be doing every concert with me, and Steve Todd, who also played on the recording, will be doing every concert except one.”