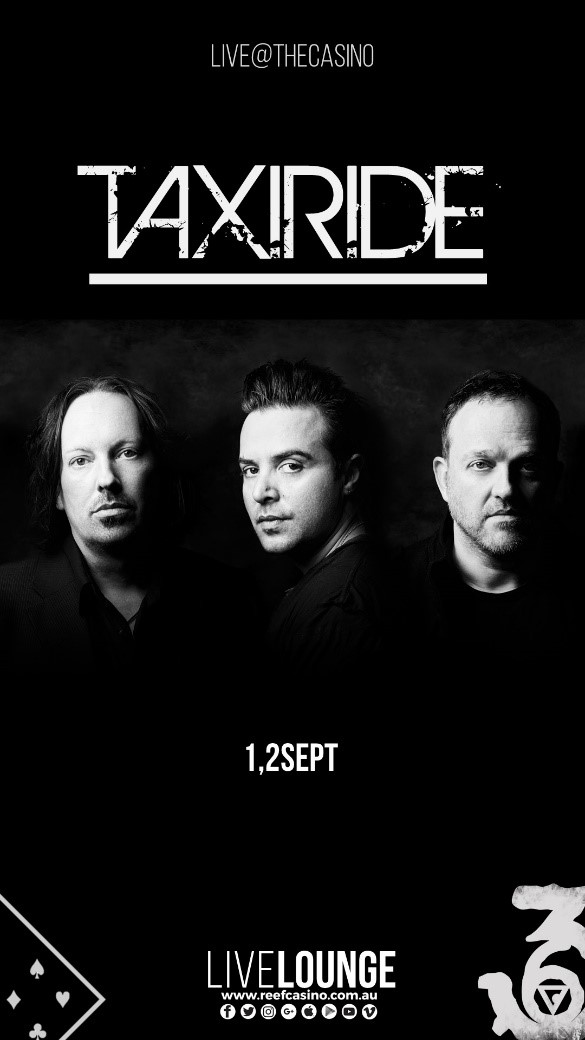 Celebrating the exciting motorsport event Targa Great Barrier Reef, Taxiride will be taking the stage at BAR36 at The Reef Hotel Casino for two massive nights this September. It is an apt celebration as more than 200 cars from around Australian and overseas vroom into the Far North for the CAMS Australian Targa Championship. The vehicles involved will battle it out across 200-kilometres, starting from Porte Cochere main entrance of the Casino, so it makes sense that spectators will want somewhere to kick back of an evening and BAR36 with Taxiride provides the perfect option.

As a beloved band of the 2000s, Taxiride hardly need an introduction. They were a household name among music fans, bringing forth a plethora of hits, winning a host of awards and opening at some of the biggest venues in the world. They burst onto the scene in 1999 and dominated radio for the next five years with songs like Get Set, Everywhere You Go, Creepin’ Up Slowly, Oh Yeah and You Gotta Help Me to name a few. An evening in the company of Taxiride is certainly a journey of sorts.

Despite a hiatus of sorts from the airwaves for a time, Taxiride never disbanded. Sometimes they worked on the fringe of the industry in their different musical projects, such as original member Dan Hall’s outfit Airway Lanes, and other times they reunited to take to the musical streets again. Their unplugged version of their greatest hits Electrophobia sparked the enthusiasm of the listening public all over again and Taxiride have been performing across the festival circuit around Australia.

Taxiride drove head-long into the music industry with their debut number one charting album Imaginate. Aside from achieving double platinum sales, this album also spawned the Top 5 singles Get Set and Everywhere You Go. Australia loved them – they won the ARIA for Best New Artist and not only successfully toured the likes of America, Europe and Japan promoting their music, but also acted as the support band for Tina Arena during her two sold out shows at Wembley Stadium. With such early success, it was evident Taxiride were going to be a permanent part of the Oz music industry, and they have. Fans still adore them, and rightly so.

The band’s second album Garage Mahal charted in the Top 5 album listings and went double platinum, showing their second release was just as well received as the first. Taxiride took off touring Europe and Japan, while at home the single Creepin’ Up Slowly hit in the Top 5 and became the number one radio song of 2002. The third album, Axiomatic also had impressive success with subsequent tours throughout India, Japan and South East Asia.

Needless to say, it’s been a hell of a journey for Taxiride and their upcoming shows at The Reef Hotel Casino will showcase just a little bit of that incredible experience. Don’t miss these two nights celebrating Targa Great Barrier Reef and great Australian music.

Taxiride performs at BAR36 at The Reef Hotel Casino on Saturday 1st and Sunday 2nd September 2018 from 9pm nightly. Entertainment continues on the Saturday night with The Tall Poppies. BAR36 – TARGABAR – will be the official gathering point for the Targa Great Barrier Reef after party. *** Live at the Casino shows in BAR36 are non-ticketed shows. For more information, please visit www.reefcasino.com.au