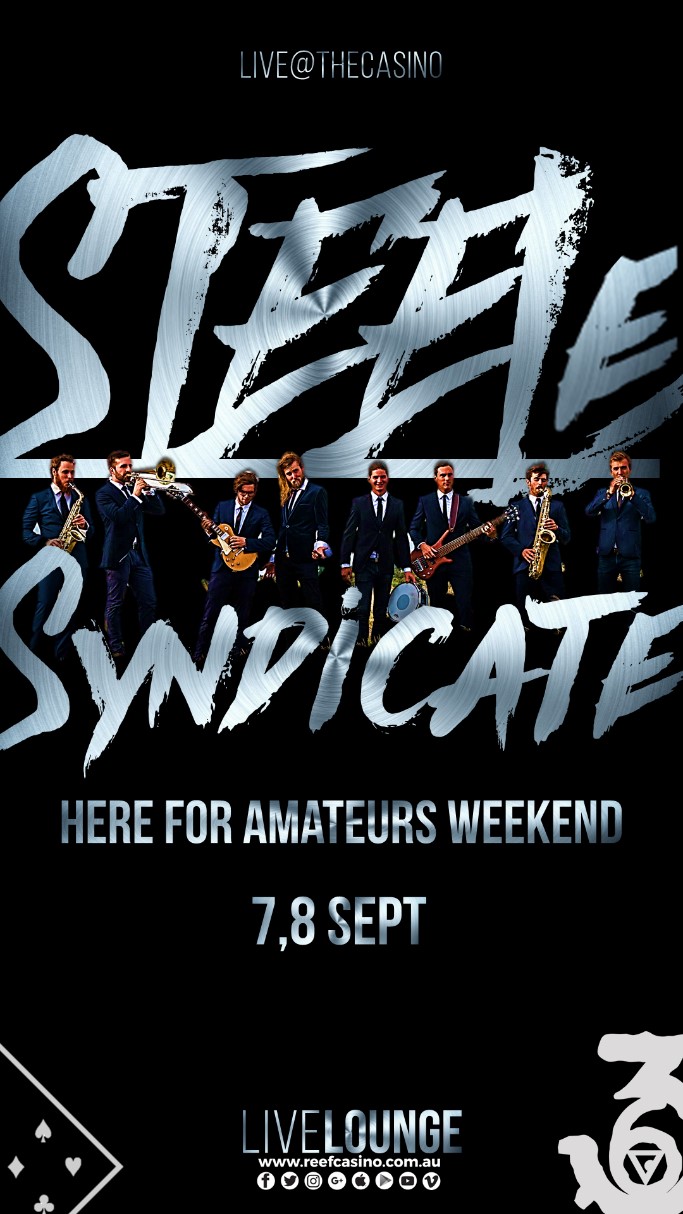 Back by popular demand, Brisbane’s octet The Steele Syndicate are returning to the North again this September for Amateurs weekend, getting their groove on for the celebrations at The Reef Hotel Casino. The up-and-coming smooth groovers brought their stylish swag to Cairns last year across Amateurs weekend and it was huge! When it came to planning the fun and style of the ‘horse race that stops the North’, it was an easy decision to invite The Steele Syndicate back to the BAR36 stage.

Described as an ‘eclectic, genre-blending sound that reimagines elements of old school funk, reggae, ska and indie rock’, The Steele Syndicate were borne from the solo work of Steele McMahon. For their show at BAR36 they will be throwing out a mix of classic hits, cool covers and awesome originals! As their bio attests, these impressive eight musicians manage to blend ‘rich vocal harmonies with a roaring three-piece horn section to create music that is energized and emotional, for dancing breathlessly and for pondering deeply’.

Since the inception of The Steel Syndicate in 2015, they’ve performed at revered venues such as the Sydney Opera House, and won two band competitions, the Sigma Stockies Band Competition and the Brightside Homegrown Battle of the Bands. They released their debut offering Antipodes in 2016 to much acclaim. The EP, and its lead single – Where I Need To Be – have garnered a huge amount of national radio airplay and seen the band continue to tour heavily.

The Steele Syndicate have just released a new single Ours, dubbed a ‘slinky blues, funk, rock’ anthem, a follow-up from their early 2018 single Funky Trombone. Their live show is smooth and will certainly get audiences groovin’. Get your groove (suit and frock) on this Amateurs weekend at BAR36 at The Reef Hotel Casino with The Steele Syndicate for two special nights only! Don’t miss this!

The Steele Syndicate perform at BAR36 at The Reef Hotel Casino to celebrate Amateurs Weekend on Friday 7th and Saturday 8th September 2018 from 9.30pm nightly. The party continues til late with Big Noise and The Tall Poppies over the weekend.