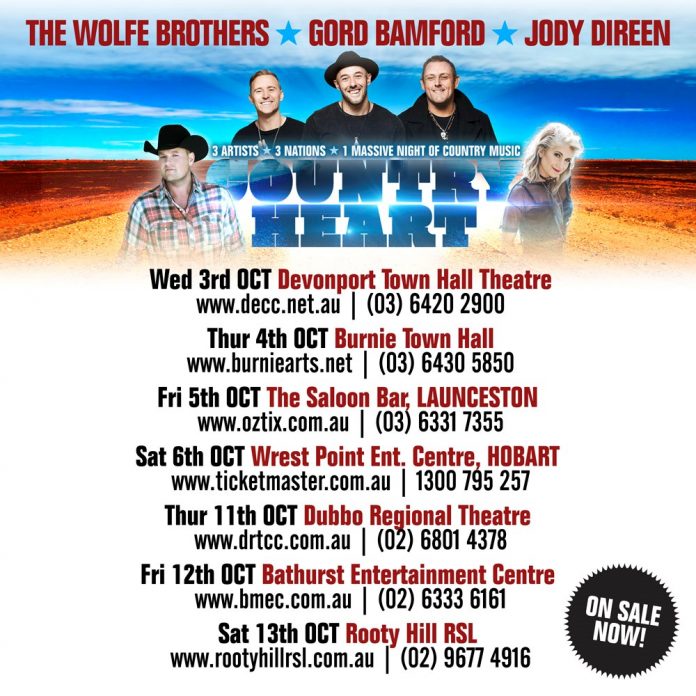 When The Wolfe Brothers announced the biggest tours of their career last month in their home state of Tasmania, it wasn’t long before fans were asking when the tour might head to their town. Now the band have announced three more dates on their Country Heart tour, featuring special international guests Gord Bamford and Jody Direen.

Three additional New South Wales dates have been announced for the tour this October – Dubbo, Bathurst and Rooty Hill. Three acts, tying in three nations, will bring together one massive night of country music – fans are certainly in for a treat! To celebrate the release of their latest album Country Heart the boys have put together an international line up of special guests that will delight all music lovers.

Joining them on the tour will be Canadian country superstar Gord Bamford, a multi-award-winning legend in Canada. Voted Canada’s Male Artist Of The Year on three occasions, Gord brings his good old boy, beer drinkin’ country party attitude to his shows and is fast building a big fan base in Australia after performing at the nation’s biggest festivals over the last two years.

Also joining the tour will be New Zealand’s current Female Artist Of The Year Jody Direen. Jody brings her high energy country cross over style to the stage and will show Aussie audiences why she is one of the hottest artists on the scene today in New Zealand. After winning the Best Country Album award for her Shake Up CD at the last New Zealand Country Music Awards, Jody signed a deal with ABC Music in Australia and is spending a lot of time based out of Sydney to work as much as she can in Australia. Jody Direen is one to watch as her career builds in Australia and beyond.

The Wolfe Brothers lead guitarist Brodie Rainbird says they are proud to bring line up on their Country Heart Tour. “Having Gord and Jody on the show as our special guests is a real honour,” he says. “They are both at the top of the tree in their home countries and our aim is to bring a world class show to all the venues on this coming tour.”

The Wolfe Brothers new album has received amazing reaction since it was released in March. The album entered the ARIA Country Chart at #2 on the week of release. The first single Ain’t Seen It Yet hit the #1 position on the national country music radio chart and the video for the song reached the #1 spot on the CMC Video chart. The second and current single No Sad Song is climbing the charts and is also receiving airplay on mainstream radio in some parts of the country.

“We made a conscious effort to make an album that was different to anything we had done before,” says singer Nick Wolfe. “We recorded this one in Sydney with Matt Fell producing. The chemistry between the band and Matt was just what we were after. Matt is also a great musician so he understood that we needed to come up with something new. We had chosen the songs that we wrote on a trip to Nashville last year. We needed a new sound and a new approach to recording these songs and Matt was completely open and willing to trying different ways to record the band. We are really happy with the outcome and No Sad Song sort of sums up how far we were prepared to go with delivering something new and fresh. This song is very different for us but it is really starting to get a reaction at radio so the risk in trying something new was well worth taking.”

The Wolfe Brothers continue to be one of the hardest working bands in Australia. They are headlining their own shows on the Country Heart Tour all across the nation for the next six months.