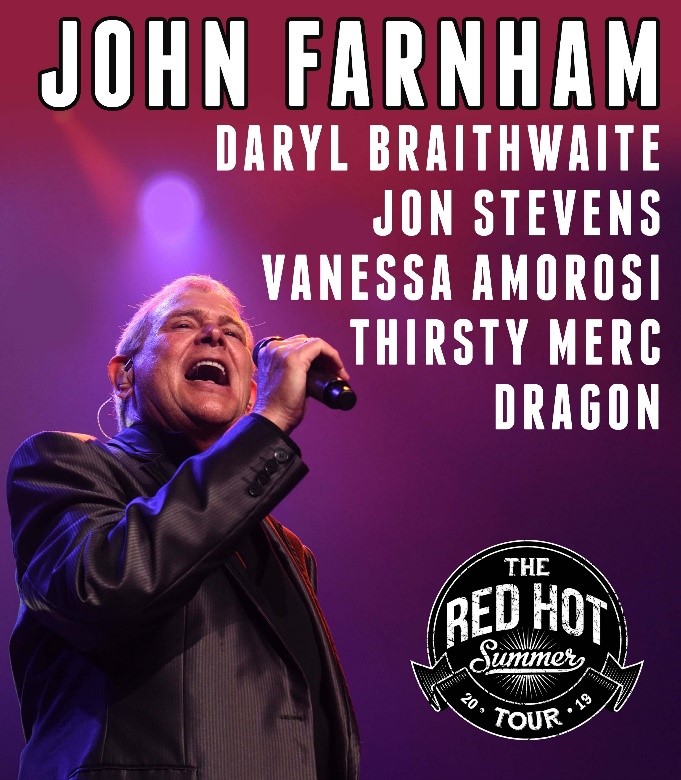 Tickets on sale 9am AEST Thursday 6th September 2018 via Ticketmaster

Due to popular demand, organisers of the award-winning festival the RED HOT SUMMER TOUR have announced another date for Series Three of the event, heading to Noosa in April 2019. The concert, featuring John Farnham, Daryl Braithwaite, Jon Stevens, Vanessa Amorosi, Thirsty Merc and Dragon, is already being touted as a sell-out.

Promoter Duane McDonald says the team are looking forward to taking the RED HOT SUMMER TOUR to Noosa in April. “We had such an incredible response from audiences last season when John Farnham headlined and we are so excited about the line-up – this is what fantastic live music is all about,” he says. “Some of the Series Three events featuring John Farnham have already sold-out and due to the huge demand we have had from Southern Queensland audiences, we’re expecting these tickets to sell really quickly. This is the first major concert to be held in Noosa for over 20 years and we’re really looking forward to it.”

Tickets are on sale at 9am AEST on Thursday 6th September 2018. Tickets are only available through authorised ticket outlets listed. Patrons are advised not to purchase tickets from Viagogo or other Third Party Sellers, as fraudulent tickets will not be honoured. Please only use the authorised sellers listed below.