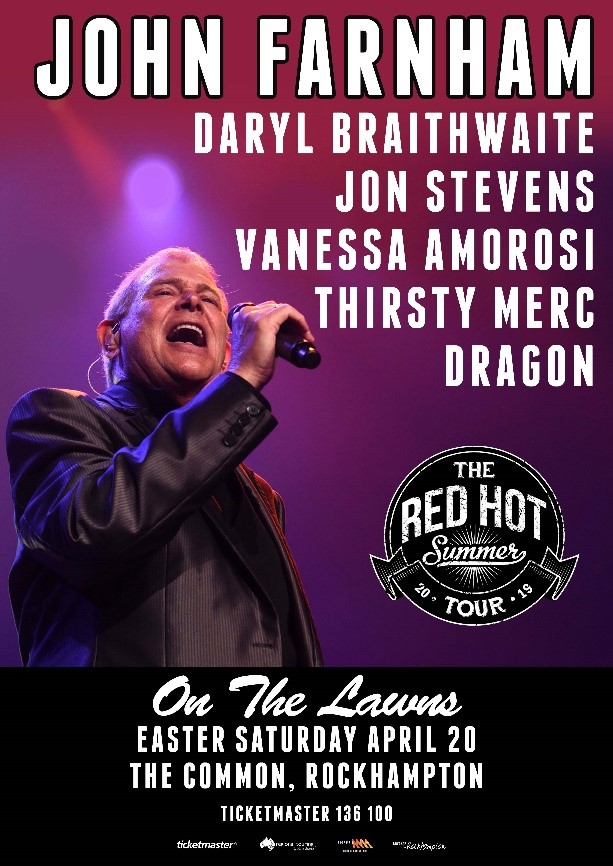 Tickets on sale 9am AEST Thursday 13th September 2018 via Ticketmaster

Organisers of the RED HOT SUMMER TOUR are excited to announce they will be bringing the award-winning festival to Rockhampton in 2019 for the first time. The Easter show is part of the touring festival’s Series Three line-up, headlined by John Farnham, featuring Daryl Braithwaite, Jon Stevens, Vanessa Amorosi, Thirsty Merc and Dragon. This is a massive coup for regional Queensland audiences. The RED HOT SUMMER TOUR in 2018 already won itself the Best Selling Festival accolade in the Ticketmaster Awards, a coveted title for an tour that is dedicated to taking first class music out to regional Australia across four months from January to April each year.

Promoter Duane McDonald says when it came to picking a location for an Easter show, Rockhampton was the perfect choice. “We are thrilled to be taking the RED HOT SUMMER TOUR to Rocky for the first time in 2019,” he says. “Rockhampton is fast proving itself to be the events capital of regional Queensland and we can’t wait for this opportunity to present some of Australia’s finest acts on Easter Saturday.”

Organised with the blessing of Rockhampton Regional Council, Mayor Margaret Strelow is excited for the concert, to be held on The Common. “Rockhampton is set to rock in Easter 2019,” she says. “We are delighted to welcome a fantastic line-up of artists to our region including Aussie greats John Farnham and Daryl Braithwaite. It’s always exciting to bring new events to our region and I’m sure our community will be thrilled to see these iconic performers here in Central Queensland together for the first time.”

Tickets are on sale at 9am AEST on Thursday 13th September 2018. Tickets are only available through authorised ticket outlets listed. Patrons are advised not to purchase tickets from Viagogo or other Third Party Sellers, as fraudulent tickets will not be honoured. Please only use the authorised sellers listed below.