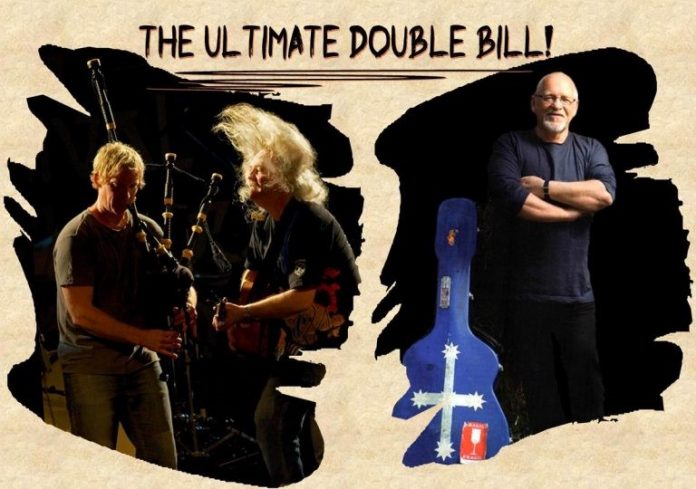 Celtic rockers Claymore and internationally acclaimed folk singer-songwriter Eric Bogle join forces for one special night this December at Memo Music Hall. No strangers to performing together, there is something of a magic chemistry between Claymore and Eric Bogle. Since they first shared the stage together two years ago, they now look for any opportunity to join together and Melbourne music fans are certainly in for a treat with this double bill at Memo Music Hall. To add to the entertainment, Claymore will bring their troupe of traditional dancers, the Glenbrae Celtic Dancers, to up the ante.

Claymore need little introduction to audiences. Heralded as one of the world’s premier Celtic rock bands, an evening in their company is always an unforgettably loud experience. Claymore’s live shows demand that you are on your feet from the outset. This enigmatic band of multi-instrumentalists not only manages to combine traditional elements of Celtic music, but they take that passion and soul and rock it right into the 21st century. Few bands can pull off the sensitive task of re-educating the traditional realm into the modern day, but that’s something of a specialty for Claymore. Not only that, but they manage to write beautiful original Celtic compositions, and even lend their style to some power rock classics, all with an Irish and Scottish twist.

There is little that Claymore haven’t done throughout their career. They have a host of impressive album releases under their belt and a long list of festival performances to their name. Since the band’s inception more than two decades ago, they’ve released five impressive albums, and performed internationally from gigs in New York, Scotland and New Zealand, to several headline appearances at the reputed Festival Interceltique De Lorient France. Combine this with performances at the biggest festivals on the Australian circuit such as the Queenscliff Music Festival, Big Blues Day Out, Perth International Arts Festival and Brunswick Music Festival to name a few, and you’ve got an impressive musical resume.

Eric Bogle is internationally respected and has been touring the world for the past four decades, from outback Australia to the streets of New York City. In 1986, he was recognised with a United Nations Peace Medal for his contribution, via music, to the cause of peace, and in 1987, he was awarded an OAM for his services to the entertainment industry. There is little that Eric Bogle hasn’t achieved throughout his extensive career. He has undertaken eight tours of North America, 11 tours of Europe, four tours of New Zealand and countless Australian tours to boot. During this time, he has played at iconic festivals such as Edinburgh Fringe Festival in Scotland, Festival Interceltique De Lorient in France, as well as Port Fairy and Woodford back home, to name a few.

Both Eric and Claymore will perform their own individual sets and join together at the end for one massive finale. Don’t miss this very special double bill. Tickets are on sale now.