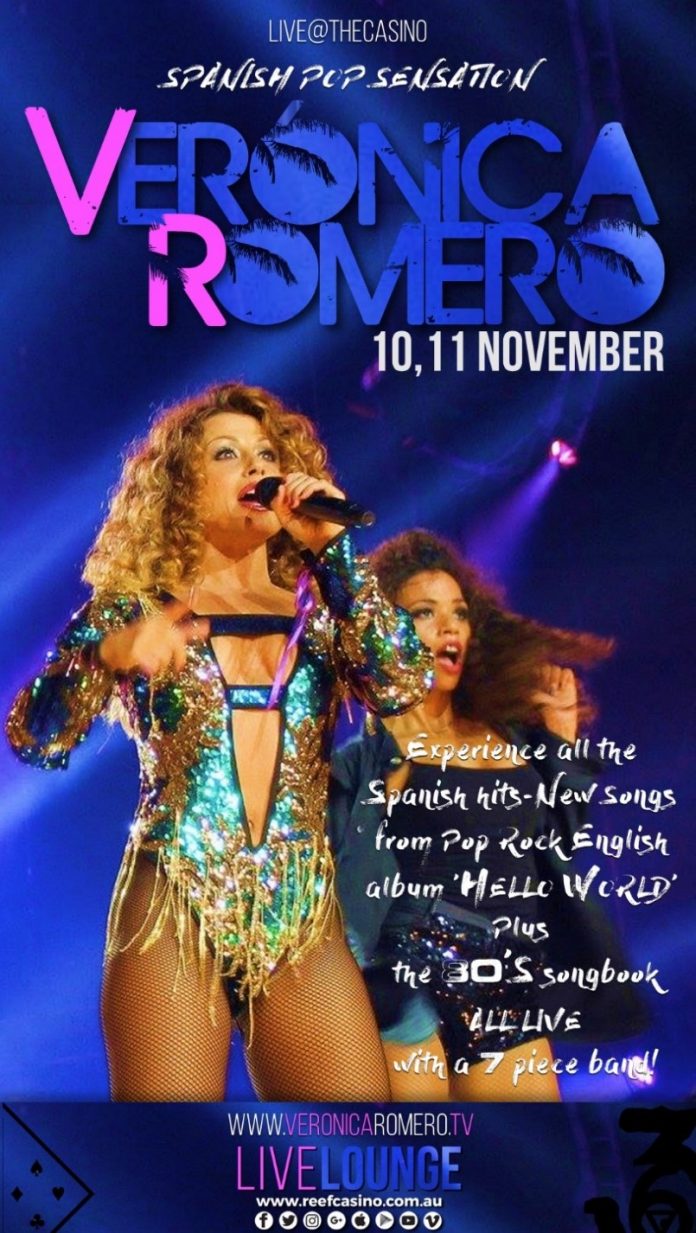 Far North Queensland audiences are in for a treat this November as Spanish pop sensation Verónica Romero heads to BAR36 at The Reef Hotel Casino for two steamy nights of music with her magnificent seven-piece band. The multi-platinum selling Spansh sensation is known best for her top-charting hits Besame, La Fuerza De Sol, Lluvia and Serotonina. She is revered for motivating and inspiring fans with her athletic physique, uplifting music and dynamic live performances.

Verónica Romero became a household name in Spain in 2002 when she became a finalist in the OT television talent show (Operación Triunfo). Her platinum single Conectado a mi, released in 2007, became the most digitally downloaded song in the history of MSN Spain, and her track No Hay Otro Amor (translated as No Other Love), was ground-breaking as the first openly gay video that gained mainstream acceptance.

Continually breaking barriers, Verónica has nine Top 10 hits to her name, numerous sold-out performances internationally, and is a favourite on prime-time television. She holds the reputation for the ‘most viewed live television performance ever’ in the history of Spain’s RTVE when 15-million viewers tuned in to watch in 2002, a record she set again in 2017. She is loved throughout Spain and overseas for her pop-rock style.

Her most recent album – Hello World – marks another milestone for this diverse artist, her first ever English language release. The electro-pop-rock album, jam-packed with radio friendly songs, is a great opportunity for English-speaking audiences to see what the fuss is all about when it comes to Verónica Romero. Audiences will be on their feet from the outset, partying with Verónica and her band as they play their way through her ultimate 80s songbook.

Verónica Romero performs at BAR36 at The Reef Hotel Casino for two special nights this November. Entertainment kicks off from 9pm on Saturday 11th November and continues til late with The Tall Poppies. Kick back for an earlier Sunday Session on Sunday 12th November from 7.30pm. *** Live at the Casino shows in BAR36 are non-ticketed shows. For more information and ticket info, please visit www.reefcasino.com.au