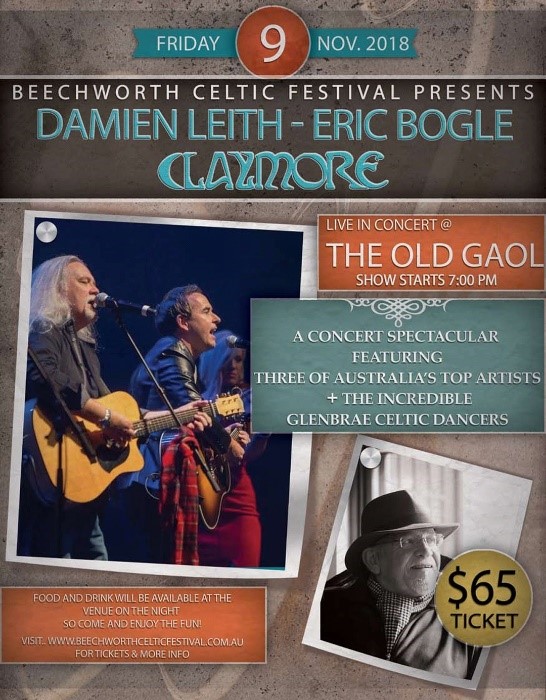 Audiences are in for a Celtic treat this November as Damien Leith, Eric Bogle and Claymore join forces for a one night only extravaganza as part of the Beechworth Celtic Festival. Considered three of Australia’s top artists, along with the incredible Glenbrae Celtic Dancers, the event will showcase the best of Celtic entertainment.

Celtic rockers Claymore need little introduction to audiences. Heralded as one of the world’s premier Celtic rock bands, an evening in their company is always an unforgettably loud experience. Claymore’s live shows demand that you are on your feet from the outset. This enigmatic band of multi-instrumentalists not only manages to combine traditional elements of Celtic music, but they take that passion and soul and rock it right into the 21st century. Few bands can pull off the sensitive task of re-educating the traditional realm into the modern day, but that’s something of a specialty for Claymore. Not only that, but they manage to write beautiful original Celtic compositions, and even lend their style to some power rock classics, all with an Irish and Scottish twist.

Eric Bogle is internationally respected and has been touring the world for the past four decades, from outback Australia to the streets of New York City. In 1986, he was recognised with a United Nations Peace Medal for his contribution, via music, to the cause peace, and in 1987, he was awarded an OAM for his services to the entertainment industry. There is little that Eric Bogle hasn’t achieved throughout his extensive career. He has undertaken eight tours of North America, 11 tours of Europe, four tours of New Zealand and countless Australian tours to boot. During this time, he has played at iconic festivals such as Edinburgh Fringe Festival in Scotland, Festival Interceltique De Lorient in France, as well as Port Fairy and Woodford back home, to name a few.

Damien Leith has many strings to his bow – acclaimed singer-songwriter, author, playwright. It has been over a decade since he smashed into the national consciousness on television talent program Australian Idol, and since then Damien hasn’t stopped working. He has nine albums and two novels to his credit, plus a children’s story app, and has toured the width and breadth of Australia and beyond. He has turned his vocals to performing gorgeous Irish tracks, which saw the release of his 2015 album Songs of Ireland, to his tributes to the greats like Roy Orbison (Roy: A Tribute To Roy Orbison, released in 2011) and his most recent Gospel album, released earlier this year, performing the songs of Elvis’ Gospel career.

Don’t miss the chance to see three of Celtic music’s greatest artists together on the one bill this November. Tickets are on sale now. 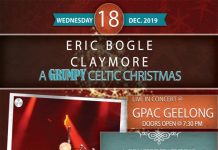