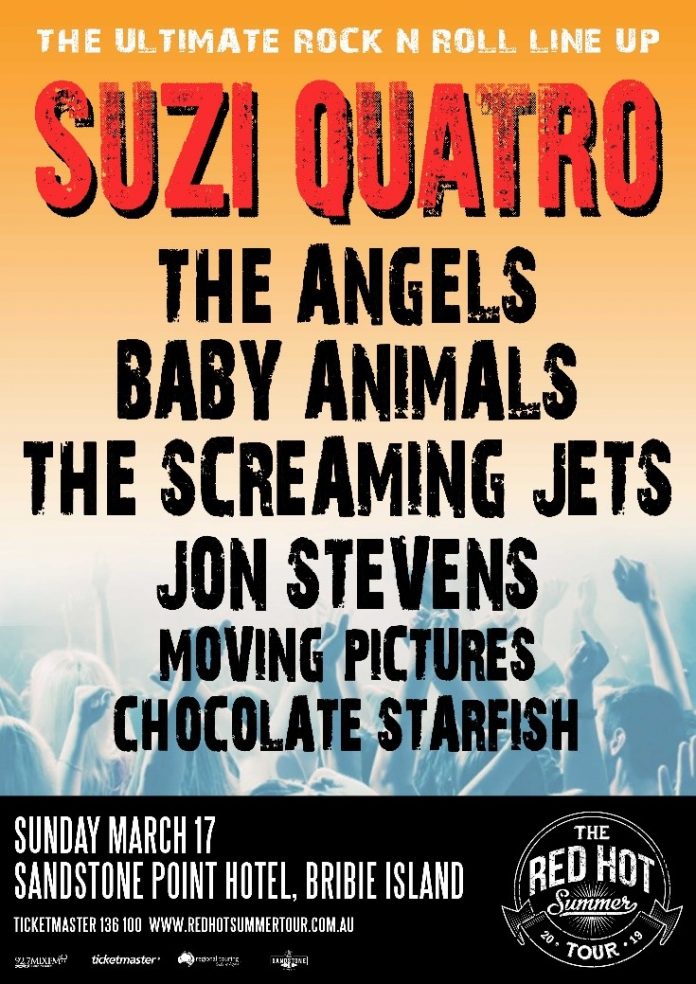 The RED HOT SUMMER TOUR have announced another Queensland date on its Series Two line-up by popular demand, bringing the Ultimate Rock N Roll bill to Bribie Island in March 2019. The only Queensland date on the tour – previously announced at Jacobs Well – has sold-out in record time, and promoters have rallied everyone involved to be able to add an additional date to the tour for music fans in the Sunshine State. The massive line-up, featuring the Queen of Rock Suzi Quatro, with special guests The Angels, Baby Animals, The Screaming Jets, Jon Stevens, Moving Pictures and Chocolate Starfish kicks off in February and runs for a solid month throughout South Australia, Tasmania, Victoria, Australian Capital Territory, New South Wales and Queensland.

This tour marks a return for Suzi Quatro in 2019, who has rocked to sold-out shows previously on the award-winning tour in 2014 and 2018. Promoter Duane McDonald says the decision to bring Suzi Quatro back to Australia for Series Two of the RED HOT SUMMER TOUR in 2019 was an easy one. “Suzi is the Queen of Rock and audiences have always loved when she is part of the tour,” he says. “We are thrilled to have her return to play these special venues. To have such a top icon on top of this incredible bill certainly makes this one of the hottest shows this summer.  This really is the ultimate rock n roll line-up – we can’t wait to head out for these shows, they are going to go off!”

There are few female performers who have a career as successful and versatile as Suzi Quatro. When it comes to summing up her decades of music, there is no better way than to quote Suzi directly – “I will retire when I go onstage, shake my ass and there is silence”. It’s no surprise then to find out that Suzi has never stopped working in one guise or another, whether it is playing her solo rock show to packed houses, hosting her own show on the BBC Radio 2, performing on the West End or penning hit songs. To date, this enigmatic performer has sold over 55 million records, in fact, for a seven-year period in the 1970s she was featured in the British charts for an incredible 101 weeks. Her hits include The Wild One, 48 Crash, Devil Gate Drive, She’s in Love with You and If You Can’t Give Me Love to name a few.

When it comes to great Aussie rock, it doesn’t come much better than The Angels. It’s been over four decades since brothers Rick and John Brewster co-founded the iconic band and have penned some of Australia’s most anthemic tracks. The Angels are widely reputed for their killer live shows. With hits like Long Line, Marseille, Be With You, After the Rain, Shadow Boxer and Mr Damage to name a few. Recently they have been celebrating the 40th anniversary of their seminal album Face To Face with a massive sold-out national tour. Audiences need to get ready to rock when The Angels take to the stage at the 2019 RED HOT SUMMER TOUR.

Baby Animals burst onto the Australian scene in the 1990s with a solid rock force and a sassy lead singer. Suze DeMarchi proved that girls could rock just as hard as guys and the Baby Animals soon kicked some impressive rock butt with hits such as Rush You, Early Warning and One Word. The band scored themselves ARIA awards for best album and toured the globe. When they split in the mid-1990s they ended a special era of Australian music. The band’s recent reformation and inclusion again on the RED HOT SUMMER TOUR line-up is a rare chance for music fans to see their original rock at its best.

Aussie rock doesn’t get much more powerful than The Screaming Jets. After celebrating their 25th anniversary in 2014, they released a long-player of all new material in 2016 – Chrome ­– an album which showed the band were still rockin’ as hard as when they first crashed onto the scene in Newcastle back in 1989. In 2018 the band are gearing up for another album release – Gotcha Covered – which hits the shelves in July. With a swag of hits such as Better, Helping Hand, Sad Song, October Grey and Come On under their belt, The Screaming Jets are renowned for their pumpin’ live performances. They will certainly rock the RED HOT SUMMER TOUR in 2019.

Moving Pictures are one of those bands whose songs are part of the Australian psyche. Their 1980s classic What About Me epitomised Australian music at the time. Their debut album Days of Innocence was a chart topper both in Australia and overseas. The group disbanded in the late 1980s but reformed again recently much to audiences delight! Their return to the RED HOT SUMMER TOUR line-up in 2019 is highly anticipated.

For music lovers looking for a special bit of concert showmanship, then look no further than Chocolate Starfish. Fronted by the enigmatic Adam Thompson, the band is known for their high energy live performances. With songs like Four Letter Word, Mountain and You’re So Vain, Chocolate Starfish powered onto the Australian music scene in the 1990s and quickly cemented themselves as an influential force. They produced two Top 10 albums and six Top 50 singles, and their inclusion on the RED HOT SUMMER TOUR again in 2019 is by popular demand.

The RED HOT SUMMER TOUR is one of the most popular touring festivals in Australia and after the sell-out run of the Suzi Quatro headlined tour in 2018, the 2019 Series Two event is certain to sell-out. These shows are what music memories are made of!

Tickets are on sale at 9am AEST on Monday 10th December 2018 via Ticketmaster. Tickets are only available through authorised ticket outlets listed. Patrons are advised not to purchase tickets from Viagogo or other Third Party Sellers, as fraudulent tickets will not be honoured. Please only use the authorised sellers listed below.