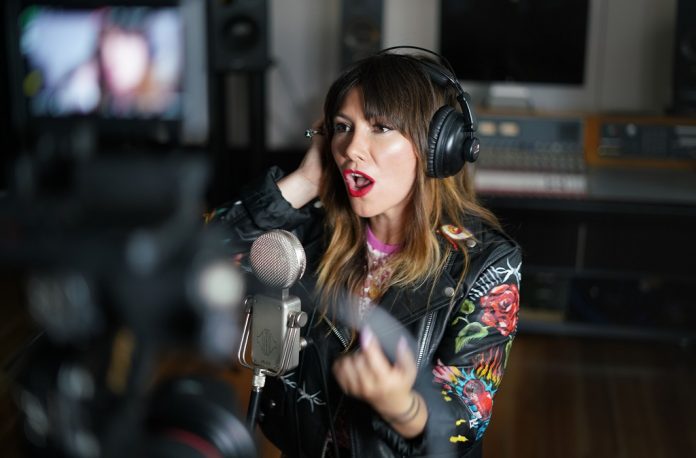 Rock music songstress Ella Hooper pretty much owns any stage she graces, and now, she is gearing up for her biggest challenge as she joins some of the biggest artists in Australian pop music on the SBS program Eurovision Australia Decides. One of ten artists, who were hand-picked from more than 700 entries, Ella will showcase a special song penned specifically for Eurovision on the nationally televised program. If she wins Australia over, she could be performing the track at Eurovision in 2019.

This year marks Australia’s fifth year of competing at Eurovision – the music competition has been broadcast on SBS for the past 35 years and is watched religiously by music lovers. Previous Australian representatives include Guy Sebastian, Dami Im, Isaiah Firebrace and Jessica Mauboy, so Ella would be in fine company. Eurovision Australia Decides is a national selection show – broadcast on SBS on February 9 – where viewers will decide who will represent Australia in 2019. Ella will head out on tour immediately afterwards where audiences will have a chance to catch her Eurovision song live!

The track Ella will be performing has been specifically penned for Eurovision by Sydney-based composer Alice Chance for the Eurovision Australia Decides performance, and for in particular for Ella, it is a one-off and something a little bit special. Data Dust is a powerful rock-pop feast, peppered with attitude. It is about digital addiction and the ever-creeping effects of social media on our lives, the power pop banger grabs the listener immediately.

“It’s very exciting to be involved in anything that is first of its kind, and in recent years, I have become more and more fascinated with Eurovision, so it is perfect timing,” says Ella. “I am hoping to bring a bit of traditional rock n roll energy to a bombastic performance of a meaningful pop song.”

Ella Hooper smashed onto the Australian music scene as part of her rock-pop band Killing Heidi as a technicolour teenager. There was something about this frontwoman immediately, she captured attention – garnering rave reviews from fans and critics alike – and become an unlikely teen icon. She penned intense, intelligent pop music and on stage, well, she rocked, taking home a swag of awards from ARIAs to APRA awards. Her solo career has seen this seasoned performer find her home, releasing critically acclaimed tunes that are a mix of bright snappy pop, synth driven singalongs and classic rock feels. Ella Hooper may have embedded herself – and her music – into the national psyche when she was only 13, but she made an impact that few since have been able to follow.

Tune in to Eurovision Australia Decides on SBS at 8.30am AEST Saturday 9th February 2019 and get your vote in for Ella represent Australia at Eurovision 2019. The performances will be broadcast live from the Gold Coast, hosted by Myf Warhurst and Joel Creasey. Watch Ella’s finalist announcement: