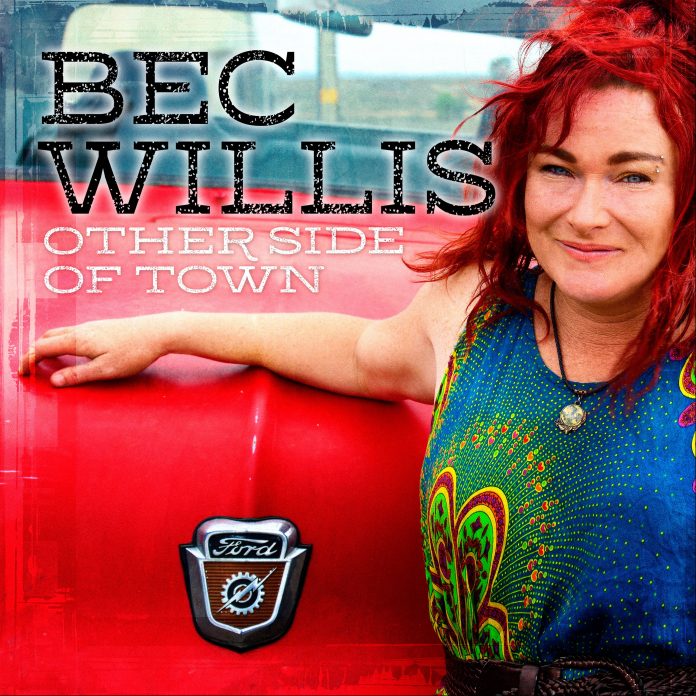 It has been a tumultuous four years since the release of singer-songwriter Bec Willis’ last album. In that time, the mother-of-two has experienced the breakdown of her marriage, relocated interstate back home and lost her Mum. Not one to give into challenges, she channelled the heartache and the result is an intensely honest 12-track country blues offering that traverses songs of turmoil and sadness to hope and uplifting positivity.

When Bec sings ‘you won’t find the girl I used to be, you’ll find me’ it is the ethos as such for the entire album Other Side Of Town. Over the past couple of years she has found herself, and her confidence as a musician – digging deep to cement her style and sound that is 100 per cent her own, something she is completely proud of. Likewise, the songs penned for the album were part of this journey and are an apt showcase of who Bec Willis is and where she has come from. Recorded with long-time friend and collaborator Bill Chambers in his home studio, it features the veritable who’s who of country musicians to bring the ‘live’ sound to the fore.

The album was penned between New South Wales and South Australia – during Bec’s transition of moving back home. In the span of two months, she lost her marriage and her Mother, and upturned her life. Emotions have always triggered inspiration for songwritng for Bec and this was certainly no different. The experience of completely changing her life was an upheaval she didn’t see coming. It has also been cathartic.

“It was a personal and spiritual return to my roots,” she says of her decision to relocate back to South Australia. “Being around my family in my original home town definitely played a huge part in a lot of the writing, as I have had a beautiful support network. This album is about me coming home to ‘me’ as much as it is coming home to my literal home in South Australia. You can’t be fake or stuck-up in our family, and you can’t hide your feelings. They are salt of the earth, working-class people who see through bulls**t, so it was the only place I could go to start my life again, so to speak.”

Other Side Of Town is easily Bec’s most honest, and in turn, relatable album to date. She doesn’t hold back in sharing every part of herself in her songwriting. “I frequently feel daunted by the fact that my heart is on my sleeve in my writing,” she says. “I can’t seem to not be honest in my lyrics, which is interesting because I’ve been a real doormat in real life and always been a bit afraid of saying what I mean, and standing up to people. Maybe this is my outlet for expression where I can be totally courageous? I believe that everyone has stories that are both unique and have universal truths – we all as humans have been through ‘stuff’, good and bad. The people I respect the most are honest people, it’s a value that can’t be bought.”

Recorded in Bill Chambers studio in Bensville and mastered by Jeff McCormack, the album features musicians Dean Ray, Chris Haigh, Ali Foster and Michael Sparrow – all long-time friends and colleagues who came together to help create the ‘live’ sound Bec wanted to achieve with the record. With two albums already under her belt – her self-titled debut release (2007) and Little Soul (2015) – the angelic singer-songwriter knew she didn’t want an album that sounded over produced, she just wanted it to sound like it would if her fans caught her at a gig with her band.

“I wanted to sound like me,” she says. “I wanted to be able to sing the songs live solo and have the studio reflect that sound, and for there be a consistency between the album version and the live version. I have never pre-meditated a sound for an album, there is magic in what happens among us musicians and producers in the studio. I wanted some fun songs on the album too, because I know that my content can be intensely emotional and recreating the album live could potentially be exhausting emotionally if there is no variety. Having songs like White Ass, Hot Spot, All We Need Is Love, Drive and Real Thing really lifts it for me and makes performing the album live a lot of fun and not so heavy.”

Indeed, Other Side Of Town is the perfect blend of an album. It is raw, emotional and honest. But it also has some tongue-in cheek sass that gets the toes tapping. It is an album that shows the depth of Bec’s writing and how much she has grown as a musician. There is something for everyone to take home from Other Side Of Town – the main one being you can’t keep a good woman down and Bec Willis is kicking butt!