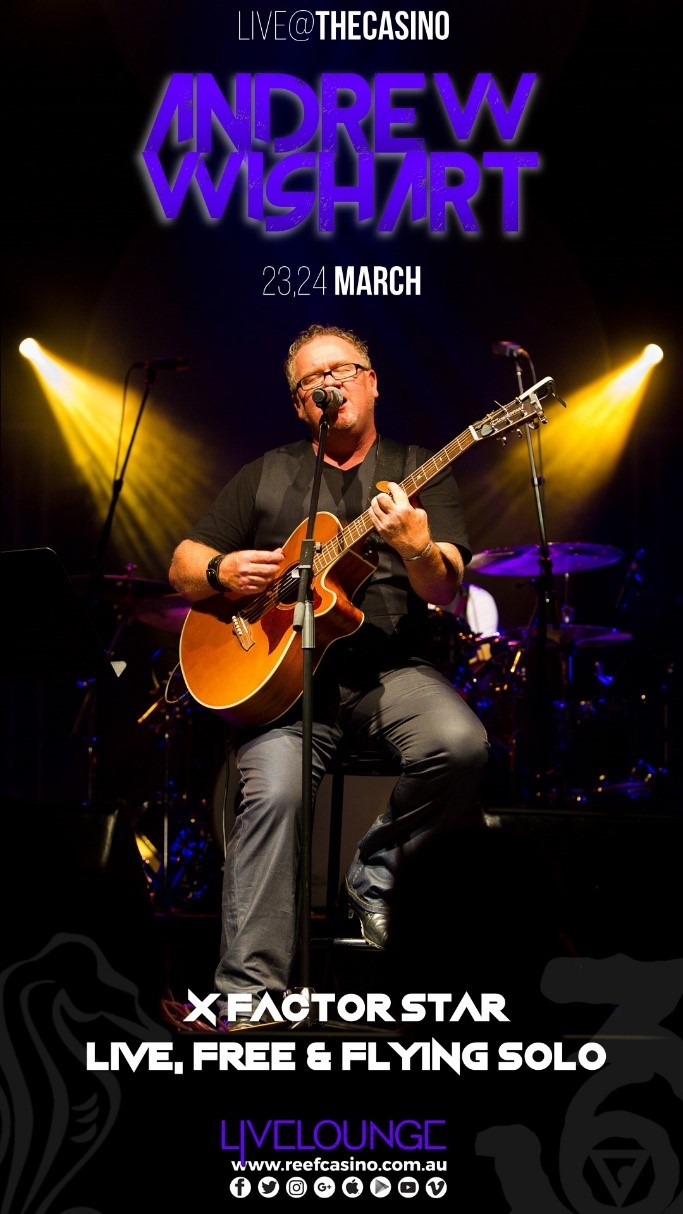 It has been a few years since singer Andrew Wishart has performed at The Reef Hotel Casino, so audiences are certainly in for a treat when he returns this March for two special nights. The 48-year-old performer, harking from Victoria’s Mornington Peninsula, packed the house on his previous two performances in 2012 and 2013 – and since then he hasn’t stopped touring, playing to fans up and down the East Coast of Australia.

It’s hard to believe that it was back in 2011 when Andrew burst into the national consciousness – and radio play-lists – with his extraordinary performances on the original series of popular television show, X-Factor. The singer, who eventually placed as runner-up, became an unlikely household name when he captivated the viewing audience – and mentor Natalie Bassingthwaite – with his powerful rendition of Adele’s Someone Like You. He rapidly found himself in high demand, not only for his showmanship, but also for his down-to-earth nature and classic style.

Credit can actually go to Andrew’s four children, who encouraged him to try out for the show – and picked his audition piece – a song which he learned in the car the night before heading on the X-Factor stage. That audition has since had a combined five-million views on YouTube – a pretty impressive number. When Andrew started singing in his audition, he took Australia’s collective breath away – there was something supremely special about this singer, audiences were witnessing a bit of musical history in the making.

This wasn’t Andrew’s first performance though, and it showed, he had been gigging around Melbourne for the past 25-years. Throughout the X-Factor competition, audiences kept behind him – he was always humble and natural. His renditions of Burn For You, Still Haven’t Found What I’m Looking For and Dakota were met with spectacular comments by the mentors and his personal mentoring by Natalie Bassingthwaite saw Andrew make a friend for life.

Fast forward almost a decade and Andrew continues to tour the country. He has a Top 10 album Its Never Too Late under his belt, and audiences still love this down-to-earth Aussie performer with the amazing voice.

Andrew Wishart performs at BAR36 in The Reef Hotel Casino on Saturday 23rd March and Sunday 24th March 2019. Entertainment kicks off from 8pm on the Saturday night with live music til late thanks to The Tall Poppies. Music kicks off from 6pm for the Sunday session and continues with The Nightshift afterwards. *** Live at the Casino shows in BAR36 are non-ticketed shows.