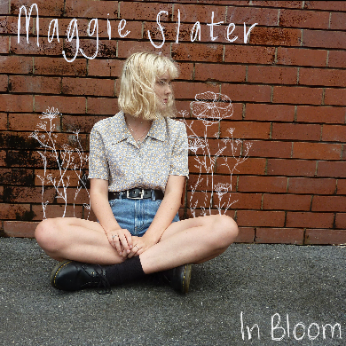 Far North Queensland singer-songwriter Maggie Slater’s debut EP, In Bloom, showcases not only an artist on the rise, but one in full control and confidence of her craft. Drawing from a key few genres such as folk, dream-pop and rock, Maggie’s maturity as a storyteller shines through on this collection of eight beautifully written and performed songs. Channeling bedroom ruminations akin to Julia Jacklin and Stella Donnelly, In Bloom plays as an open book. Listeners are given an insight to the musician – there is an intimacy to the release and you can’t help feeling that you are getting to know Maggie Slater.

It is hard to believe, given the maturity of songwriting, that In Bloom is Maggie’s debut offering. She started recording it during her final year of high school and wrapped it up not long after graduation. In fact, the majority of the songs from the album were penned from the ages of 14-17. The young musician has always had an infinity with music though and it shows. There is family video footage of her singing a song she wrote for her brother when she was only seven. From the age of 15 she has been busking regularly on the weekends around her hometown of Cairns, earning her stripes and garnering the attention of the movers and shakers of the industry, this quickly evolved into bookings for local gigs.

The tracks for In Bloom were recorded at renowned Big Sister Studios in Cairns and were produced by The Middle East’s Mark Myers. Mark is a formidable force in the Queensland music industry, so when time came to choose a producer, there was no other choice. His expertise in the studio helped Maggie develop her ideas and shape them into the songs she envisioned. The EP includes an impressive list of guests, including Tristan Barton and Simon McMenamin (The McMenamins) who were brought into the recording process to add their flare to drum and string sections.  “They are both so incredibly talented,” reflects Maggie. “It’s such a privilege to have them be a part of this. For backing vocalists, I had some friends come in and help out. It was a super fun experience to get to hang out in the studio with them and I’m so glad I got to include my friends in the project.”

The result is an intimate set of songs; sometimes sweet and playful, sometimes solemn. They grapple with some real issues and don’t shy away from exposing true vulnerability. While it’s true that Maggie’s songs do possess a certain maturity, they are also brimming with a childlike honesty that is ultimately refreshing. It is about the way that music resonates – and touches – people that is important to Maggie. “I’ve always felt everything really deeply,” she confesses. “I just try my best to be as emotionally candid as possible. In terms of shaping my music, it’s the people who come up to me after a show and tell me how a certain song really hit home for them that has the most impact. A lot of the time it’s songs which are about something really personal and that always acts as a reminder to write honesty and without fear of judgement. It’s a reminder that sometimes by putting your own experiences out into the world, you’re simultaneously articulating exactly how somebody else feels or has felt as well and I think that’s pretty cool.”

Musically, the songs instrumentation is tight and they play well to the subject matter of each track. Mind Reader and I Want You are quite different in approach and sound, but as she puts it “both cover my impatience and incessant desire to fall in love.” Ballerina as a painfully heartfelt letter to an unrequited love; “You had me wrapped around your little finger / You had me dancing at your feet like a little ballerina”. Yet the track Dog takes another turn entirely, using the backdrop of playful ukulele and upbeat drums to tear apart the tendencies of an unfaithful individual. The standout feature throughout all of the tracks remains Maggie’s distinctive voice, which shines and gives unique life to each of these stories.

The deepest point of the EP comes in the form of Where Does The Butterfly Go When It Rains? “I wrote it when I was dealing with some really severe anxiety after the death of a friend,” admits Maggie. “I was having panic attacks almost daily and I felt as though I was sitting back and watching everybody enjoy life whilst I was only capable of being a bystander.” It’s a delicate sentiment, and portrays the kind of honesty that is at the heart of the EP. The stories told through the eight-tracks are essentially relatable to everyone on one level or another. The EP wraps with the tender song Grow. “I wrote Grow with the intention of it being the closing track,” Maggie says. “In essence, it’s about that leap from childhood to adulthood and trying to navigate how exactly to come out the other end as somebody you’re proud of being.” It’s a slow-burning and earnest song, an ode to growing up and making the right choices, and is a fitting end to the EP.

In Bloom is aptly titled in more ways than one. It serves as a reminder of Maggie’s upbringing, growing up in the nature of Far North Queensland which helped inspire so much of her writing. But it also portrays the picture of an artist using her experiences to grow and create some truly endearing music.