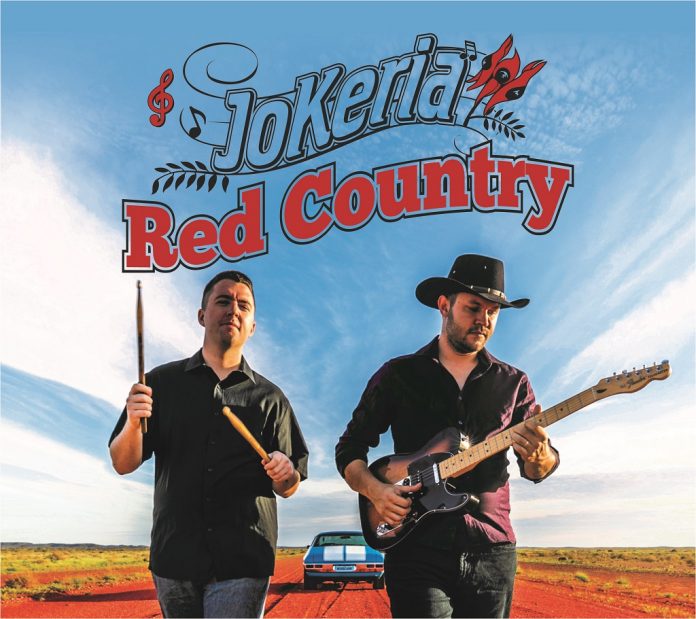 There is something special about Western Australian country duo JoKeria’s sophomore album, Red Country. The imagery within the songwriting is so vivid, it is almost as if you are standing in the heart of the ‘red country’ the songwriters drummer Josh Philpot and vocalist/guitarist Kendall Smith have written about. There is something almost tangible about the storytelling – showcasing not only the landscape, the people and the culture, but even the small intricacies of JoKeria’s homeland.

Following on from their 2017 debut Back No More, JoKeria took their second release back to the drawing board. Where many bands may have packed up their bags and headed for the big smoke, Josh and Kendall instead dug their heels in, embracing their local community and creating an album that alludes to a township that has had its ups and downs, but most importantly is the sum of its people and their experiences.

Their community – Roebourne – with a population of under a thousand people has a strong sense of family and it was this that JoKeria wanted to bring to the fore in Red Country. “Having grown up in Roebourne, we have lived through the bad publicity, the disadvantages, and the exclusion of our people in society for way too long,” says Kendall. “We feel its time there was a dramatic change in our community.”

Josh and Kendall have been playing music together in their community since the age of 22. For the two musicians, real country music was something that resonated with them both. A large part of what makes up the identity of the band is Kendall’s Indigenous lineage. Born of an Aboriginal Father and a Non-Aboriginal Mother, he grew up understanding what he describes as ‘both sides of the story, and both sides of the fence’, something that he has translated into the band’s songwriting. The importance of storytelling within his Indigenous culture is something JoKeria has also embraced, ensuring their songs have a storytelling narrative to connect with people.

With their plans in place to record their follow-up album, it was important for JoKeria that they also found a producer who understood the importance of that narrative and helped them keep true to the music they wanted to create. Enter Bill Chambers, who thanks to a fortuitous meeting in Tamworth, took their sophomore album under his wing. The band had only met Bill by chance at the 2018 Tamworth Country Music Festival, when recommended by mutual friend Lucky Oceans, they had the opportunity to perform at his Sessions show at The Pub. The connection was immediate and by the end of the year JoKeria had sent Bill 13-demo tracks for their forthcoming release.

The duo hand-picked the strongest songs they thought would keep to the ethos of the album. In fact, the songs hadn’t been written with any particular theme in mind – they had evolved organically throughout the songwriting process. “Songwriting for us is something we only do when the inspiration is flowing,” says Josh. “We do not try to force ourselves into writing songs as we will not get the quality we are looking for. As such, we put no time limit or restrictions on writing songs, this way there is no pressure, and songs will be completed when they get completed. Some songs have been written in hours, whereas some have taken years. We also like using common sayings as part of our songs and normally the lyrics will be completed first before adding music to them later.”

In a serendipitous twist, JoKeria will be launching their album at the Red Country Music Festival, apt indeed for an album that embodies the spirit of the Red Country. It brings full circle everything they wanted for the release – a hometown launch and a chance to showcase their community to a wider audience. They are already planning a West Australian tour and looking ahead to Tamworth Country Music Festival in 2020. More importantly, they are looking forward to sharing their music – true-grit Australian country music – with the world.