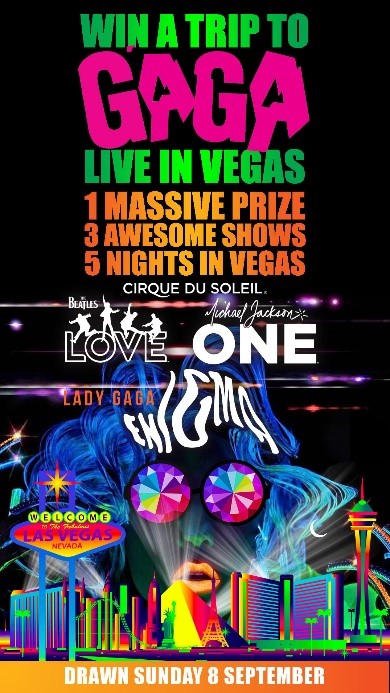 The Reef Hotel Casino is going GAGA! With a massive two-months of entertainment planned across the complex. Two lucky winners will have the chance to score themselves the most coveted tickets available – premium seats to see Lady Gaga live in concert, in Las Vegas to boot! The Reef Hotel Casino is giving two lucky winners the chance to fly Business Class to Las Vegas to see Lady Gaga in concert on Halloween, as well as two premium tickets to see Cirque De Soleil’s Michael Jackson ONE and The Beatles LOVE – that’s three massive shows in the entertainment capital of the world!

A stellar line-up of entertainment, events and promotions are planned at The Reef Hotel Casino across July, August and September. The GAGA promotion kicks off from July 8 and runs until September 8. Every Thursday, Ladies Night will be rolled out in both the Casino and BAR36 with luxurious fashion prizes, bubbles and cocktails, a dance band and DJs.  Every Saturday evening The Tall Poppies go ‘POP’ with their spin on Gaga, Michael Jackson and The Beatles. The gorgeous Sarah C join The Tall Poppies and the GaGa Fest from July 18-22. Described as embodying a heady combination of dynamite energy and a powerful soulful voice, Sarah C is a seasoned performed who has earned the reputation as ‘Melbourne Soul Diva’ on her home turf. A Taste of Gaga with Sarah C and the Poppies means audiences are certainly in for a treat.

August will GOGO very GAGA with an effervescent Lady Gaga tribute act August 10,11 and 24-25. GAGA featuring Megan Barnes & the Cinderella Band present a full GAGA experience with all the hits. The Vegas theme also continues with the highly anticipated return of The Australian Bee Gees Show across August 16-18. Direct from Vegas, this is more than just a concert experience, it is a light and visuals extravaganza. This revered tribute band have been touring and paying homage to the legendary Brothers Gibb for more than two decades and are described by the president of the Bee Gees Fan Club USA as the best Bee Gees tribute in the world. An evening in the presence of this acclaimed band is akin to being back in the stadiums of old, watching the Bee Gees traverse their greatest hits.

August 30 Targa Great Barrier Reef roll into town, so even Targa or TAGA are going GAGA. Watch out for the GAGA GALA pool deck event August 30. Tickets will go on sale soon. Headlining the Targa entertainment with a little ‘Go your own way’ is The Australian Fleetwood Mac Show – Running in the Shadows August 31 and September 1. The Australian Fleetwood Mac Show are always on the road, in one year they performed more than 52 shows at some of the southern state’s largest venues, often selling out. Formed in 2000 by musicians Gary Stewart and Ursula Cain, the band also features lead guitarist Eddy Santacrue, bassist Bill Kervin and drummer Lloyd G. many of the band members have long music careers within Australia, playing the rock circuit. The Running In The Shadows show covers the best of Fleetwood Mac’s career. From the early hits from the music of Peter Green, through to the Rumours album era, spanning up to Tango In The Night and even some of Stevie Nicks solo material, there is something for every Fleetwood Mac fan to enjoy.

All this ‘GAGAness’ culminates with the major draw of the massive prize Sunday 8 September at 9:30pm, plus the Gaga tribute returns to party the night away!  There are multiple opportunities to enter the draw to win tickets to win a trip to GAGA Live in Vegas. Terms and conditions are available within The Reef Hotel Casino.

These are non-ticketed, free shows in BAR36. The GAGA GALA will be a ticketed event.  For more information, please visit www.reefcasino.com.au