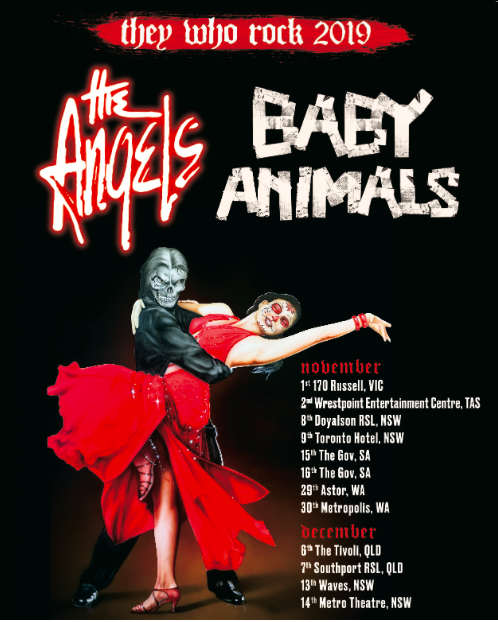 When it comes to two of the greatest rock bands in Australian music history, it doesn’t get much better than The Angels and the Baby Animals. Now, for the first time, these two legendary bands are joining forces and heading out on the road together for a massive They Who Rock national tour, making this the rock event not-to-miss in November and December 2019. To top it off, the bands have recorded their own versions of each other’s songs for a limited single release to celebrate the tour – with The Angels laying down the smash hit One Word, and the Baby Animals tracking the cult classic Marseilles.

No strangers to gracing each other’s stages, The Angels and the Baby Animals have been performing in each other’s periphery for decades. Most recently, they were on the same bill on a sell-out run of Red Hot Summer Tour dates that saw them rock the socks off of audiences around the country, so much so they were asked back by popular demand. It was evident that the time had come to head out on the road as a united force for a huge joint tour jam-packed with hits such as Am I Ever Gonna See Your Face Again, One Word, Take A Long Line, Rush You, No Secrets and Early Warning to name a few.

The Angels need little introduction to rock music fans – they are what has made rock music great in Australia. Having recently celebrated four decades since the release of their seminal sophomore album Face to Face with a sold-out tour, their songs are part of the psyche of generations. Songs such as Dogs Are Talking, Marseilles, After The Rain and Be With You to name a few, their music speaks to young and old. With the dynamic musical partnership of highly respected guitarists Rick and John Brewster, bassist Sam Brewster, drummer Nick Norton and the incomparable vocal stylings of Dave Gleeson, The Angels are a powerhouse, rocking as hard as they ever have.

Baby Animals celebrated their first #1 album as their debut self-titled release reached the top spot on the ARIA Album Chart in 1992. Fast forward 27 years and Suze DeMarchi’s reputation as a fierce and inspiring front woman remains undiminished, her rapport with songwriting partner and guitarist Dave Leslie is as dynamic as ever. Baby Animals first emerged onto the Australian music scene in 1991 and delivered four massive hits off their debut album. They also picked up three ARIA awards in 1992 and their self-titled album was named in the 100 Best Australian Albums. Their second album Shaved and Dangerous reached #2 and their 2013 release This Is Not The End reached Top 20. The band features DeMarchi, Leslie and a revered rhythm section in drummer Mick Skelton and bassist Dario Bortolin.

For Rick Brewster, the tour and subsequent 7” single releases are an exciting prospect. “The Baby Animals are a fantastic band, always have been and I can’t wait to tour with them,” he says. “Dave Leslie is one of my all-time favourite guitarists and great to watch on stage. It was a lot of fun recording their song One Word, and I love their version of our song Marseilles.”

John Brewster is in agreement. “Personally, I regard Suze DeMarchi as one of the greatest front singers this country has ever known, I love the blues in her voice,” he says. “We have developed a great friendship with the band over the years and our whole band reckons they are great – it is going to be wonderful going out on the road with them. We might even have a surprise or two in store.”

Tickets to The Angels & Baby Animals They Who Rock tour are on sale now. The Angels’ version of One Word and the Baby Animals version of Marseilles are available now digitally through Bloodlines. A limited edition 7” vinyl single will be available for collectors to purchase at the shows.