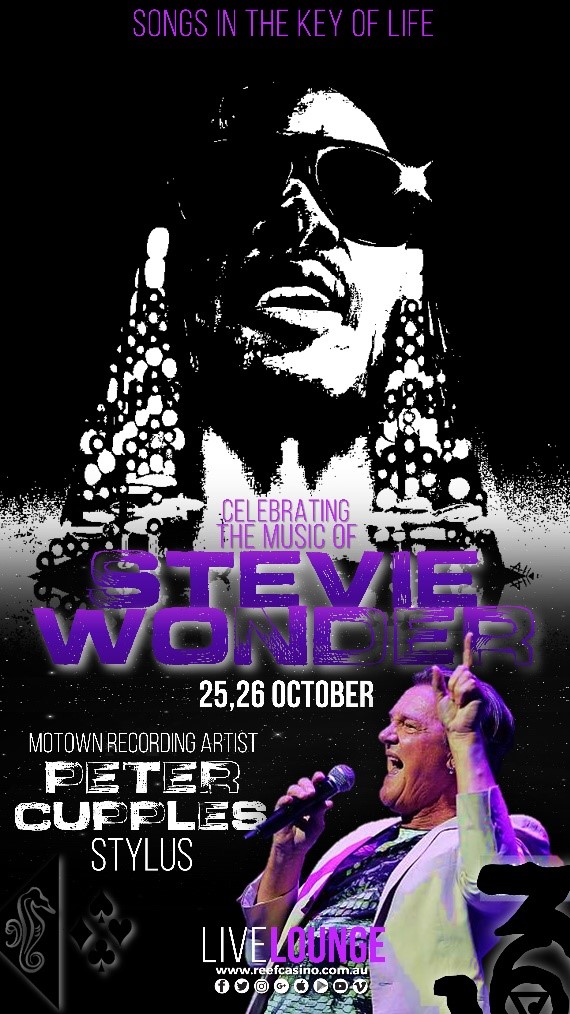 It has been a few years since iconic performer Peter Cupples performed at The Reef Hotel Casino. His soulful shows have always been warmly embraced by North Queensland audiences, and now, touring his new show – Songs In The Key Of Life celebrating The Music of Stevie Wonder, music lovers are in for a real treat. As a Motown recording artist, and an incredible singer-songwriter in his own right, Peter Cupples is well placed to perform any music he puts his voice to. This is his nod to amazing Stevie Wonder.

Peter first smashed onto the music scene in the mid-1970s with soul band Stylus. As the lead singer and key songwriter for the band, he became a well-recognised face. Stylus cemented their place in the history books when they signed to Motown-soul label Tamala Motown – this launched them onto the international scene. Stylus recorded four albums which includes hits such as Summer Breeze, World of Make Believe, So Much Love and Work Out Fine to name a few. In five years, the band cranked up an incredible 50 weeks a year on the road.

Stylus called it quits in 1980, but Peter went on to have an incredibly successful solo career. His first solo single Fear of Thunder was a Top 20 hit. He also had success with the song Blame It On The Weather, which also went on to be a hit for John Farnham. His first foray into the solo spectrum was as the Peter Cupples Band which featured revered musician David Hirschfelder on keys.

Throughout his career, Peter was a regular face on television, from his regular spot on the Midday Show, to his appearances on shows such as Hey Hey It’s Saturday, Tonight Live with Steve Vizard, I.M.T and G.M.A to name a few. For 15-years straight, he also performed on the Channel 9 annual Christmas Eve spectacular Carols By Candlelight at Myer Music Bowl. He also never stopped performing his solo material, including taking a coveted spot opening the show for Frank Sinatra at Sanctuary Cove.

Peter is, and has always been, the consummate songwriter. He has written and recorded many albums across the years, including penning songs for other artists and some charity organisations such as Make A Wish Foundation and Sacred Heart Foundation. He has also demonstrated his versatility by releasing different genres of albums, from a roots album called Bac2basix and a jazz release About Time.

Stylus also reformed for a short period of time, releasing a live album in 2003 called Still Alive and doing a string of shows around the country. Peter now tours regularly performing a mix of his solo material and hits from Stylus. He has been deservedly described as one of the country’s favourite singer songwriters.

Stevie Wonder’s music needs little introduction. He is, rightfully so, considered one of the greatest artists of all time. A musical virtuoso, he has penned over 30 top 10 singles, has 25 Grammy Awards, and has produced some unforgettable hits such as Lately, I Just Called To Say I Love You, You Are The Sunshine Of My Life, Superstition and Happy Birthday to name a few.

Don’t miss Peter Cupples Celebrating The Life Of Stevie Wonder – Songs In The Key Of Life at BAR36, The Reef Hotel Casino for three nights from Friday 25th and Saturday 26th October 2019. Entertainment kicks off from 9pm nightly. Music continues late on the Friday night with Big Noise and Saturday night with The Tall Poppies.

*** Live at the Casino shows in BAR36 are non-ticketed shows. For more information and ticket info, please visit www.reefcasino.com.au