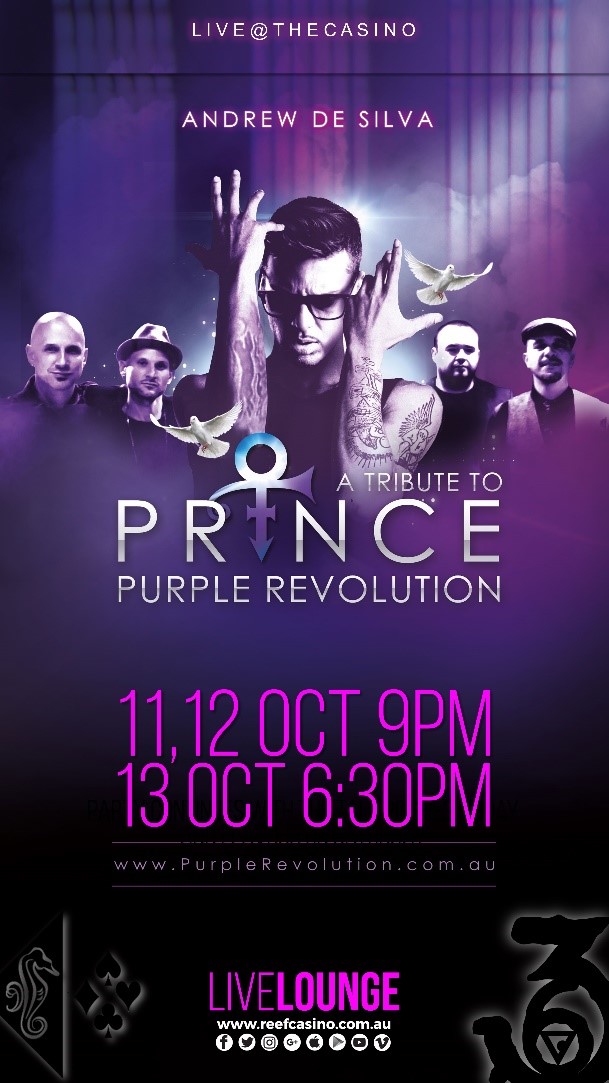 It doesn’t get more legendary than the music of Prince. When the iconic performer passed away in 2016, the world mourned the loss of the multi-instrumentalist who was ahead of his time musically. For Australian musician Andrew De Silva, this loss was keenly felt. The songwriter was already dedicating some songs in his shows to his idol and it was a natural progression to band together some of the best musicians in the business and make it a proper Prince show. The first show launched in Albury three weeks before Prince passed away. After his passing, Andrew decided to keep the tribute show going to pay homage to him in the best way possible – through music.

Purple Revolution: A Tribute To Prince returns to Cairns for three special nights at The Reef Hotel Casino, including a Sunday session – and music fans are in for a treat indeed. Whether you were a fan of Prince’s irrevocable style, or only discovered his catalogue after his passing, Purple Revolution is a show for all to enjoy. The last time the show was performed at BAR36, the room was full every night. The shows return in 2019 promises to be no different.

There is no doubt the Purple Revolution will pay homage in a party fashion – after all, Prince penned some of the best songs in music history. With tracks such as Little Red Corvette, 1999, Cream, Diamonds & Pearls, I Wanna Be Your Lover and the iconic Purple Rain, audiences are guaranteed to be on their feet from start to finish. Prince’s hits smashed the Billboard Charts and created memories for generations – now Purple Revolution: A Tribute to Prince will endeavor to keep those memories alive.

When it comes to an artist performing Prince’s material, then Andrew De Silva is confidently placed to do so. There is little he can’t do – from fronting R&B supergroup CDB in the 1990s, to pub rock icons Boom Crash Opera nowadays, Andrew is also an established singer-songwriter within his own right, winning the 2012 Australia’s Got Talent for his incredible vocal style.

Andrew De Silva brings with him an all-star band to help bring Prince’s music to life on stage in Purple Revolution. Featuring some of the best players in the country such as Simon Hosford (Vanessa Amorosi / Jon Stevens) on guitar, Aaron Mendoza (Meg Mac / Angus & Julia Stone) on keys, Dave Matthews (Kate Ceberano) on drums and Carmen Smith (Guy Sebastian) on vocals. Andrew, a multi-instrumentalist, will not only take the vocal duties for Purple Revolution, but will also adorn the electric guitar in the style of the Purple one.

Don’t miss Andrew De Silva and friends as they pay homage to the Purple Prince in Purple Revolution: A Tribute to Prince. This is an unforgettable musical experience – Andrew De Silva isn’t just playing the music of Prince, he embodies the true spirit of the late great performer.

Purple Revolution: A Tribute to Prince featuring Andrew De Silva performs at BAR36, The Reef Hotel Casino for three nights from Friday 11th to Sunday 13th October 2019. Entertainment kicks off on the Friday and Saturday nights from 9pm, with an earlier Sunday Session start of 7pm. Music continues late on the Friday night with Big Noise and Saturday night with The Tall Poppies.

*** Live at the Casino shows in BAR36 are non-ticketed shows. For more information and ticket info, please visit www.reefcasino.com.au