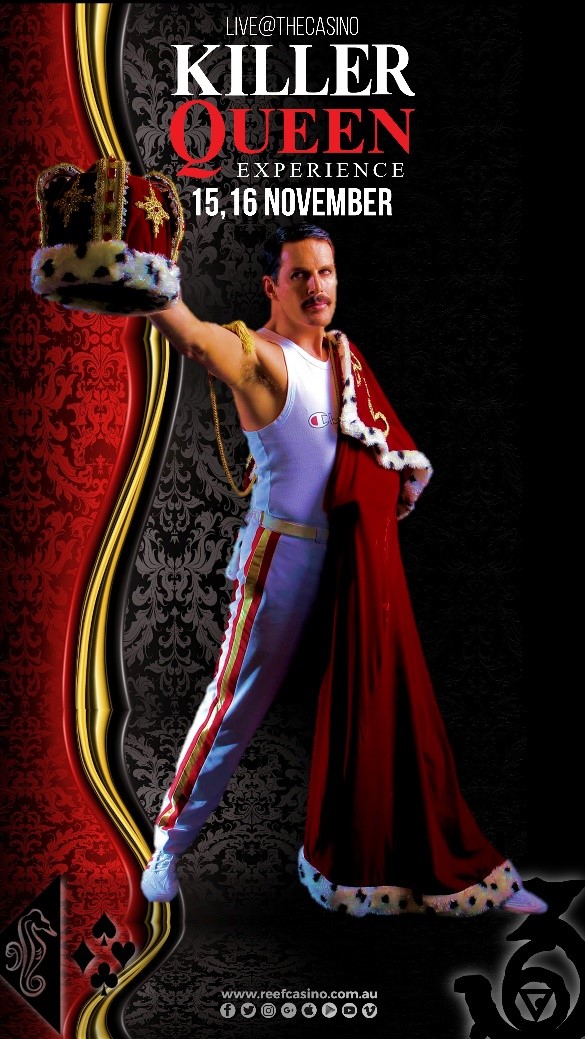 Back by popular demand, Killer Queen return to The Reef Hotel Casino this November for two massive nights of iconic hits. Dubbed the ‘Killer Queen experience’, the band will rock audiences with their dynamic live show and if their previous performances in the North is anything to go by, the house will be packed!

Considered one of the world’s leading Queen tribute bands, Killer Queen gives Queen fans that chance to re-live the legendary band’s music and party the night away. Killer Queen aren’t just any tribute band, they’re reputed as the only one to ever be endorsed by Queen guitarist Brian May himself, a huge compliment, and an indication of how good their representation of the legendary band really is.

Brisbane-based Killer Queen is fronted by super-talented vocalist Johnny Blunt, who looks and sounds so much like the late great Freddie Mercury that in 2010 he appeared in a French TV look-alike show and was voted by seven million viewers as the best Freddie facsimile. That was high praise indeed, but an even bigger boost came soon after when Queen’s founding guitarist Brian May saw footage of Killer Queen and pronounced the show “astonishing”. After the band appeared on Australia’s Got Talent and scored rave reviews from Dannii Minogue and Red Symons, the rest of Australia was ready to agree. There was something special about Killer Queen and it wasn’t just Queen fans who were enamoured by the band.

All the members of Killer Queen bear uncanny resemblances to their original equivalents. This is no accident. The band members are dedicated to researching the objects of their admiration. On-stage movements, hairstyles, costumes, lighting effects – all are specially created to mirror the life and times of Freddie Mercury and his band. Over $100,000 has been spent on clothing alone! The result is an incredible show that transports audiences back into the many magic moments in the career of perhaps the greatest rock band the world has ever known. Queen’s trademark ‘big’ sound is reproduced note-perfectly without recourse to backing tapes. Every sound that pounds through the speakers at a Killer Queen show is made live, there and then.

Killer Queen’s repertoire covers all of Queen’s greatest hits from Bohemian Rhapsody, We Will Rock You, We Are The Champions, Somebody To Love, Radio Ga Ga to Another One Bites The Dust. The band performed at one of the pre-screening events of the Bohemian Rhapsody movie sessions in Sydney, and continue to maintain a grueling touring schedule, both around Australia and overseas. The band’s lead-singer John Blunt is regularly lauded for his likeness to Freddie – he has recently been part of the Legends In Concert show at The Palms at Crown, Melbourne Casino, is overseas now undertaking the same show at Foxwoods Casino in Connecticut and performed to packed houses in 2018 in Las Vegas! Killer Queen have toured throughout Asia and headlined major international festivals, including Singapore’s Beerfest Asia and Norway’s Skanevik Blues Festival.

The Killer Queen Experience perform at BAR36, The Reef Hotel Casino on Friday 15th and Saturday 16th November 2019 from 9pm nightly. Music continues until late with The Tall Poppies keeping the tunes going on the Friday and Saturday night. *** Live at the Casino shows in BAR36 are non-ticketed shows.