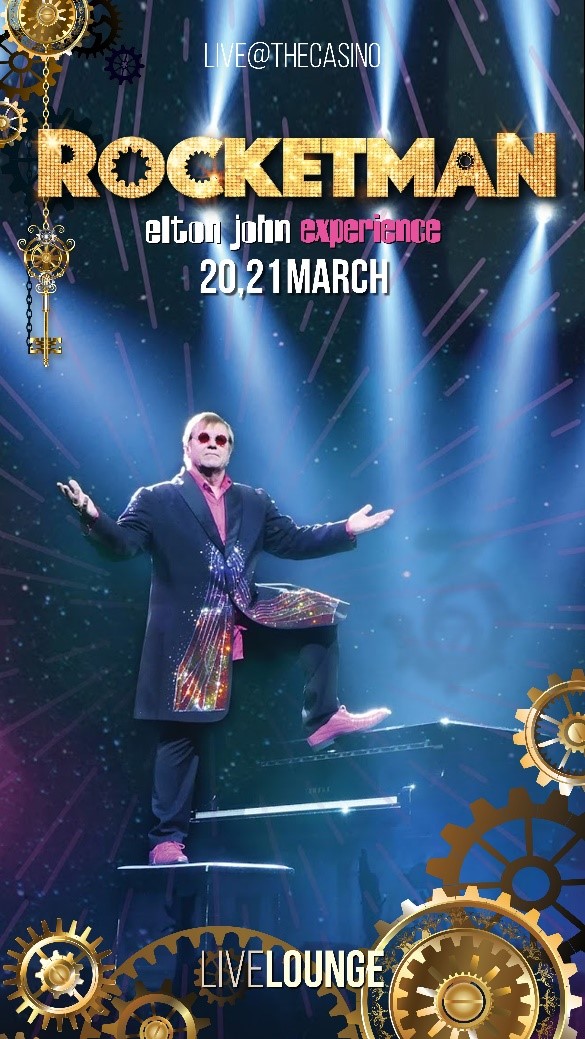 If you missed the chance to see Sir Elton John during his recent Australian tour, never fear – The Reef Hotel Casino has the next best thing for fans of the effervescent showman. For two nights only this March, Rocketman, the Elton John experience will bring all the glitz and glamour of a Sir Elton John concert to the BAR36 stage for two magnificent nights. Performed by virtuoso pianist Greg Andrew, he has an uncanny likeness to the man himself and has many audiences pinching themselves that they aren’t actually in the company of Sir Elton. The Rocketman show has seen Greg take all the hits to more than 30 countries.

Now, showcasing all the music that appeared in the Rocketman biopic, Greg takes audiences on a journey through the music that has made Sir Elton John such a beloved icon around the world. With tracks like I’m Still Standing, Saturday Nights Alright for Fightin’, Candle In The Wind, Daniel, Honky Cat, Don’t Let The Sun Go Down On Me and Crocodile Rock to name a few, the show is jam-packed with hit after hit.

Greg himself has been recognised as one of the top Elton John tribute artists. In 2017 he performed at TRIBFEST UK, arguably the most prestigious tribute festival in the world – held annually in Yorkshire in England. Performing to the capacity crowd with his six-piece band, he received acclaim from fans and critics alike. His show spans all facets of Sir Elton’s career, giving every generation who have become fans of the icon a chance to revel in the music – from the hey days of the 70s, to the Lion King soundtrack, there is something for everyone of all ages.

It was actually Sir Elton’s song Your Song that first resonated with a young Greg Andrew, and he hasn’t looked back since. He was taken by the piano melody, captivated by the parallels between Sir Elton and his own musical passions. Perusing classical piano and further studying at the Queensland Conservatorium of Music, Greg’s passion is evident in his live performance of Elton’s classic hits.

“I hope the crowds will come and bring the global phenomena of the Rocketman movie to life with myself and the band on stage,” he says. “Sir Elton always made the audience feel like every show was their show, and I’m no different – make it a celebration of this incredible music and musicianship, make it a memory.”

Sir Elton John is currently on his world tour, his final – the Farewell Yellow Brick Road Tour – after more than half a century on the road. The tour, spanning four years, will see him perform more than 300 shows in five continents. Sir Elton is a multi-Grammy award winning songwriter and performer, rightly considered one of the most successful solo artists of all time. He has more than 50 Top 40 hits and has sold an incredible 300-million plus records around the world. Along with songwriting partner Bernie Taupin, he is considered of the most formidable songwriters in the music industry and has been inducted into the Songwriters Hall of Fame (with Bernie) and the Rock and Roll Hall Of Fame. He is an icon.

Rocketman – The Elton John Experience performs from 9pm nightly at BAR36, at The Reef Hotel Casino on Friday 20th and Saturday 21st March 2020.