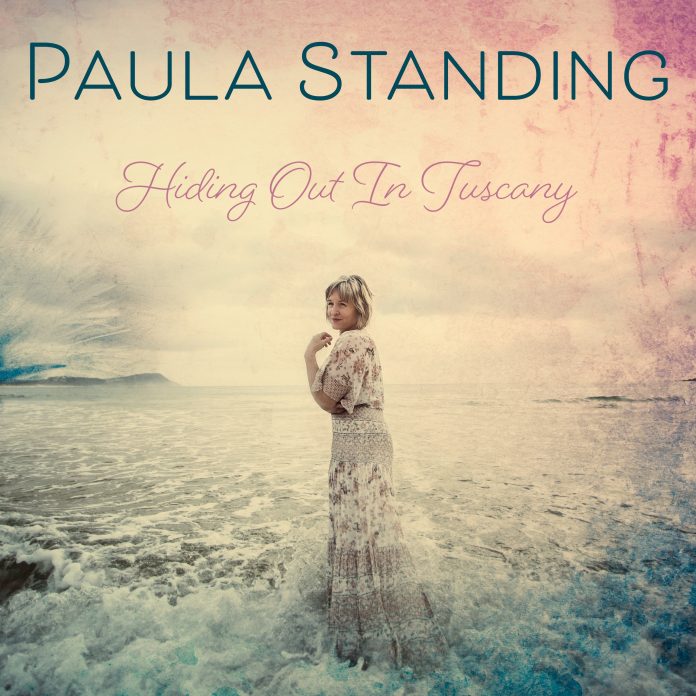 Songwriter Paula Standing’s whimsical single Hiding Out In Tuscany, the first from her forthcoming full-length album – The More I Give – slated for release in September, is an exquisite look at life, and taking chances. It is a bold step forward for the ethereal musician, whose eclectic songwriting comes together into a cohesive body of work in her forthcoming release, showcasing her bewitching vocals and her storytelling ability. There is an Americana feel, with Celtic undertones, wrapped together with a strong current of country music – a direction that has always been the heart and soul of everything that Paula does.

It’s hard to believe that Paula Standing only started recording her own material in 2013. A self-taught guitarist, she explored the world of ballads, with a dark underlay of emotion. Her songs are focused around storytelling first and foremost. With acclaimed releases already under her belt, she explores different nuances of songwriting, delving deep into the heart of a matter and delivering tracks that strike a chord with listeners.

When it came to time to pen her next full-length album, Paula wanted to create something a bit different and step outside her comfort zone. Fortuitously, she met fellow musician and songwriter Lou Bradley at Tamworth Country Music Festival in 2019 and they connected musically. Little did she know at the time this meeting would help create the direction she was looking for with her release. Lou introduced her to revered producer Rod McCormack and a new writing partnership blossomed.

“We agreed to meet for a week of writing to see where it took us,” says Paula. “After a highly successful five days, we had nine brilliant songs, and after writing another one afterwards, I decided I would record all ten. Rod and Lou both agreed, and here we are, with the album The More I Give, named after one of the tracks. I wanted to produce an album rather than a collection of songs. The album has a precise theme and feel that holds together like a full product; all of the songs were written specifically for this album, with this idea in mind.”

Picking the first single from the release was always going to be an important choice. Hiding Out In Tuscany – the second track from the album – embodies where Paula has been, and where is she is going. “Hiding Out In Tuscany seemed like a good choice to start the ball rolling; as it covers the journey I am making both with my career and this whole album,” she says. “Taking a risk and ‘setting sail’ for distant horizons is a wonderful metaphor for how this project is shaping up.”

Hiding Out In Tuscany was written with three of the students who use Rod McCormack’s The Music Cellar studio – Ash Sheehan, Jacky McCormack and Toby Wells. “I started my songwriting and recording career much later than most in my life,” says Paula. “The song echoes this with ‘I always wondered where I’d be…‘ and followed up with the pledge to ‘take the train…‘ as I have made that decision now to take steps into a brand-new world. Ash, Jacky and Toby started the song during their regular weekly session, with Rod and myself sitting in at regular intervals to add our bits and ideas into the mix. Later in the week Ash and Toby returned to finish it off.”

Paula says when it came to recording in the studio, Rod and Lou knew exactly what to ‘dig out of me for each song’. “It was all handled so well and at no time did I feel everyone involved was anything but supportive and interested in making the best possible creations,” she says. “Recording was sublime, I was given superb roughs to take home to learn, so when I returned to the studio it all happened with ease. Rod was magic to watch as he handled so much of the playing, as well as the production. Hiding Out In Tuscany certainly grew over the session (in the studio) with Rod adding a really full sound, building up as it goes along, again correlating with a growing confidence to dive into the deep end, so to speak. This track was sent to Ireland for Pat Crowley to add keys and accordion, which has a pleasant feel of putting you into various places and countries around the world. It also has a catchy instrumental part.”

Paula showcased Hiding Out In Tuscany live during the Tamworth Country Music Festival this January and it was met with great response. She already can’t wait to share it, and her forthcoming album, with the world.