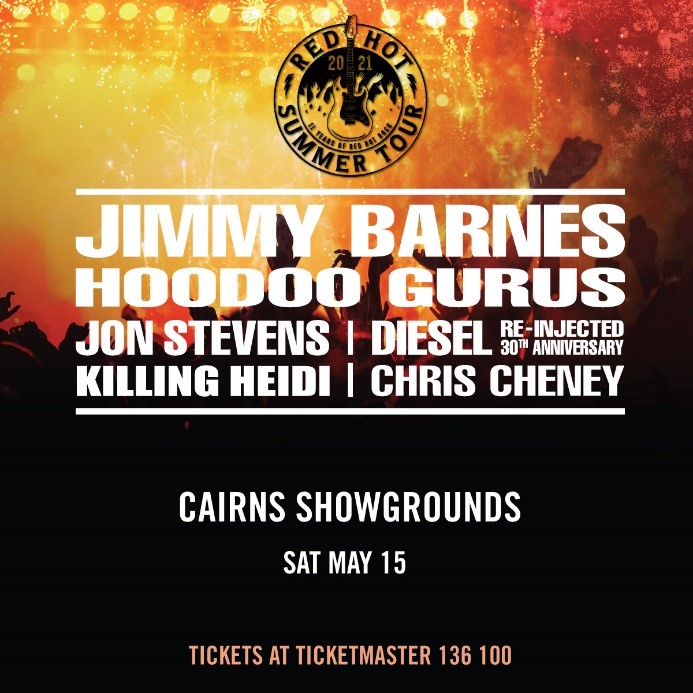 The 2021 RED HOT SUMMER TOUR has announced two legs on its successful festival tour, with dates throughout Queensland, New South Wales, Victoria, South Australia, the Australian Capital Territory, Tasmania and Western Australia. Now, in another special announcement, organisers have added another show to the run, with the addition of a Far North Queensland date scheduled. With a line-up featuring Jimmy Barnes, Hoodoo Gurus, Jon Stevens, Diesel, Killing Heidi and Chris Cheney, the RED HOT SUMMER TOUR will return to Cairns Showgrounds in May.

Promoter Duane McDonald says the return of the festival in 2021 has been a result of continuous hard-work to ensure the tour can be presented in a COVID-safe manner, and can continue to support the incredible music scene within Australia. “We were disappointed to cancel much of the 2020 tour,” he says. “But safety was, and always is, our first priority. We continue to work with governments and stakeholders to make sure that we can continue the RED HOT SUMMER TOUR in 2021, and to ensure that all the shows are delivered in a COVID-safe way.”

Bringing together an enviable line-up of Aussie acts was paramount for the organisers, and Duane says everyone onboard for the 2021 run can’t wait. “We are excited to have the opportunity to hit the road in 2021 bringing some great music experiences that the RED HOT SUMMER TOUR has been sharing with audiences for over a decade,” he says. “Bringing together our mates in the music industry and taking the tour around Australia has always been special, but next year’s run is going to mean a lot to everyone. We’ve invited some of the artists who have been championing the tour from the very beginning and know everyone can’t wait to put on an incredible show. We look forward to making new musical memories for the next decade and can’t wait to see all the music-lovers who have supported us over the years at one of the shows in 2021.”

Tickets for the 2021 RED HOT SUMMER TOUR Cairns show are on sale from 9am Thursday 10th December 2020. Tickets are only available through Ticketmaster. Punters are advised not to purchase tickets from Viagogo or other Third Party Sellers, as fraudulent tickets will not be honoured.