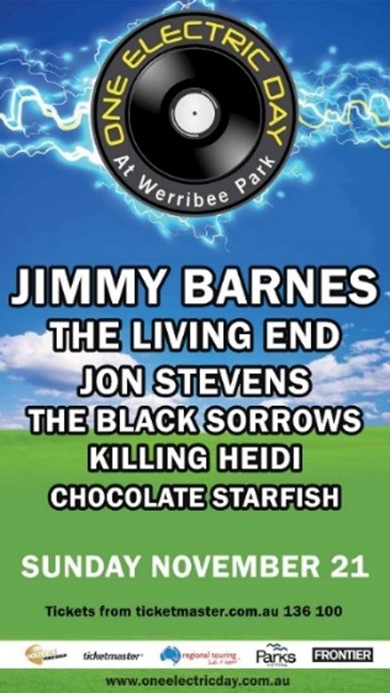 Tickets On Sale 10am Friday 21st May 2021 Through Ticketmaster

There is little doubt that One Electric Day is one of Melbourne’s favourite one-day music festivals. Every year, the festival which proudly touts an all-Australian line-up, sells out in minutes and has become a highlight on the entertainment calendar for music-lovers. While COVID-19 meant there was no event in 2020, the festival triumphantly returns for its eighth year in 2021 sporting an impressive line-up headlined by Jimmy Barnes, with The Living End, Jon Stevens, The Black Sorrows, Killing Heidi and Chocolate Starfish. It is fitting that Jimmy Barnes headlines the coveted event as it returns, considering that he was on its first ever bill back in 2013 and continues to be a strong supporter of One Electric Day.

For organiser Duane McDonald, announcing the return of One Electric Day is an exciting prospect. “Audiences have always been so supportive of One Electric Day,” he says. “It has become a really special event where we see many fans return year after year, it is like catching up with friends and family. After the curveball that COVID-19 threw at us, we are looking forward to catching up with those friends and family this year for a very overdue celebration of great Australian music. One Electric Day 2021 will create some great memories for us all.”

Jimmy Barnes, affectionately known by all as Barnesy, is the heart and soul of Australian rock and roll. He will release his 20th studio album Flesh And Wood on 2 July. He has 17 #1 albums under his belt, more than The Beatles, and is considered rock royalty both in Australia and overseas. His third book, Killing Time: short stories from the long way home, was released in 2020 and debuted at #1 on the non-fiction book charts.  Never one to slow down, Jimmy also has two new books slated for release in 2021 – a children’s book, Rosie The Rhinoceros, in October and a cookbook with Jane in November titled Where The River Bends. The Living End are renowned for their blistering live performances; their reputation precedes them – they rock from the first note to the last. Since they first smashed onto the scene in 1997 embodying a new Australian sound, The Living End have released seven studio albums, two of which have debuted at #1 on the ARIA Chart – four of those are Platinum and two are Gold. They have been nominated for an incredible 27 ARIA Awards. Jon Stevens needs no introduction, with a career that spans more than four decades, he has a swag of solo hits to his name, as well as songs which have become all-time favourites from his time with bands Noiseworks, INXS and the Dead Daisies. He pays homage to the bands that helped cement him as rock legend with the Noiseworks & INXS Collection, featuring hit after hit.

The Black Sorrows have an impressive back catalogue, with unforgettable hits such as Harley & Rose, Dear Children, The Chosen Ones, Never Let Me Go and Chained to the Wheel to Hold On To Me and New Craze. They have sold more than a million albums worldwide, toured Europe (to sell-out shows) and won an ARIA for Best Band. Joe Camilleri and his fantastic band will have audiences on their feet as they perform the hits that defined a generation. Killing Heidi made Australian music history with the release of their rock-pop debut Reflector. The smash hit singles – including Weir and Mascara took out four ARIA awards and reached four times platinum status. It also catapulted Killing Heidi and its teen musicians – Ella and Jesse Hooper – into international superstar status. For music lovers looking for a special bit of concert showmanship, then look no further than Chocolate Starfish. With songs like Four Letter Word, Mountain and You’re So Vain, Chocolate Starfish powered onto the Australian music scene in the 1990s and quickly made a name for themselves as an influential force. They produced two Top 10 albums and six Top 50 singles; and have just dropped a new single What’s Up.

Tickets for One Electric Day go on sale to the general public at 10am AEST on Friday 21st May 2021 through Ticketmaster. Punters are advised not to purchase tickets from Viagogo or other Third Party Sellers; fraudulent tickets will not be honoured. 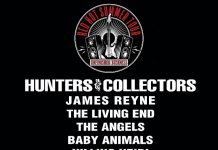